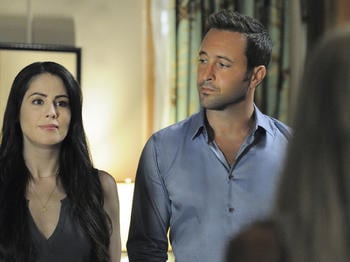 Hawaii Five-0 celebrated its 150th episode by bringing together all the women in Commander Steve McGarrett’s life. Throw in steady girlfriend Lynn, former girlfriend/almost fiancee Catherine, and MIA CIA mother Doris, and the stage is set for one hell of an episode. Like the series’s 100th episode, the 150th aimed to close one chapter of McGarrett’s story. It succeeded, but in a much less violent way which was more about peaceful closure than finite endings.

McGarrett’s romantic evening with new love Lynn is interrupted by none other than his almost-fiancee Catherine. I’m trying to think of a more awkward moment in Steve’s life. I’m pretty sure there are worse, but this would definitely make the Top 5. The point of Catherine’s visit is to ask for help on behalf of Doris. The woman decided that it would be a good idea to try to break Wo Fat’s father out of a CIA Black site. As much as Steve resents his mother, he can’t leave her to rot. Danny tips off Five-0 that something sounds fishy, so everyone hops on a plane for Morrocco. Five-0 infiltrates the black site with a little involuntary help from a guard they kidnapped. Let’s just say the long-awaited mother-son reunion was physically painful.

You think Steve is stubborn, we should remember where he gets it from. Doris refused to leave without Wo Fat’s father Yao, Five-0 must break him out as well. Luckily Doris didn’t go into this plan completely half-cocked. She had an exit strategy in play in the form of a hidden C4 charge. After a few scuffles, the team and escapees are able to blast their way out of the black site. Once free, Doris assures everyone that the secrets Yao has against his captors will keep them all safe from prosecution. He’s of no harm to anyone so long as he’s left in peace.

The episode is sprinkled with flashbacks to Steve’s early childhood, the years before Doris faked her death and left her family. As happy as she was with her children, Doris never forgave herself for accidentally getting Wo Fat’s mother killed. The guilt has eaten her alive for most of her life. Being a spy was easier than being a mother carrying that weight. The way Doris left her family all those years ago is the reason McGarrett knows that no matter how many times he tracks her down, she’ll leave. Saving Yao was the last major barrier for her conscience. Doris assures her son that once Yao is settled she’ll be home for good. Maybe she will, maybe she won’t. Doris loves her son. She even proves it by asking him to find her secret compartment in the house where she kept her old diaries. They detail the joy she felt being a wife and mother. Time will tell if she’ll return. As for Catherine, she and Steve part on good terms. Though she now knows Steve was planning on proposing (thanks to Lynn’s slip of the tongue), Catherine is happy in the CIA. Things might have been different had Steve gotten his big moment, but he didn’t. At the end of the day it’s alright because we all know who McGarrett’s true soul mate is: Danno.

Elsewhere in the hour, Danny asks Grover to investigate Grace’s love life while he has away tending to his father post-surgery. Grover executes this favor by recruiting his son as his spy. The problem is that based on promos for next week, Grover’s son seems to be Grace’s new boyfriend. It will take until next week for me to formulate the many ways this is going to be awkward for Five-0. McGarrett had to say some difficult goodbyes this week, but they were a long time coming. His farewells were more about closure. Chin has to say goodbye to Sara, and that’s just painful. Sara had two safe, loving homes she could live in. Chin takes comfort in this, and that it’s not the last time he’ll see his niece.

Did the 150th episode live up to expectations? Has Steve finally gained some closure with the women in his life?