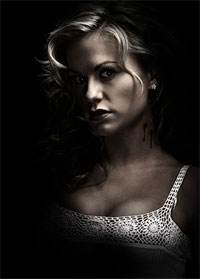 I would like to say thank you HBO. Thank you for making True Blood so awesome, and thank you for the very spoilery – although more in the intriguing sense – press release you sent around for July’s run of True Blood episodes. If you’re not watching this show – SLAP! – what is wrong with you?

Seriously, I’m one of these Twilight hating types who thinks that Ann Rice’s books got a little pretentious, Blade is just a leather fetishest’s wet dream . I like my vampires from the Near Dark, BuddyVerse, and Let The Right One In side of town. Down, dirty, introspective, and cool. Get all victorian or teeny-bopperish, I hit the flush handle. True Blood has it going on. Now, let me spare you from any further hyperbole. Here is what True Blood has planned for July.

With Jessica (Deborah Ann Woll) in tow, Bill (Stephen Moyer) and Sookie (Anna Paquin) head to Dallas to carry out Eric’s (Alexander SkarsgĂĄrd) vampire-reconnaissance mission — but a surprise awaits them at the airport. At the Light of Day Institute, Jason (Ryan Kwanten) falls victim to a practical joke, but has the last laugh when the Newlins anoint him for a higher calling. Maryann (Michelle Forbes) throws Tara (Rutina Wesley) a birthday party at Sookie’s, attracting much of Bon Temps to its Bacchanalian revelry. Sam (Sam Trammell) postpones his departure from town to attend the bash, connecting with Daphne (Ashley Jones) in the process. Having barely escaped Fangtasia, Lafayette (Nelsan Ellis) finds himself reluctantly pulled back into Eric’s orbit.

In Dallas, Sookie connects with one of her own, then joins Bill and Eric for a strategic summit at the lair of the missing vampire, Godric (Allan Hyde), attended by his lieutenants, Stan (Ed Quinn) and Isabel (Valerie Cruz). Meanwhile, Jason shows his mettle at a Light of Day boot camp, and is rewarded for his hard work with a gift from Sarah (Anna Camp). Rebuffed by Tara in her relocation efforts, Maryann decides to cast her spell on the staff of Merlotte’s, softening Tara up towards her new ‘family.’Eric shares a little-known secret about his past with Bill, and Sookie makes a decision that might solve the Godric mystery — or get her killed.

Accompanied by Isabel’s human boyfriend Hugo (Christopher Gartin), Sookie embarks on a dangerous mission to locate Godric. Meanwhile, Bill is shocked when a vampire from his distant, more violent past resurfaces in Dallas. In Bon Temps, Daphne presses Sam to get comfortable in his own skin(s); Hoyt (Jim Parrack) continues his unlikely courtship of Jessica; Andy (Chris Bauer) interrogates Lafayette about his disappearance; and Tara and Eggs (Mehcad Brooks) take a detour while on a road trip. At the Light of Day camp, Jason faces difficult emotional and physical choices.