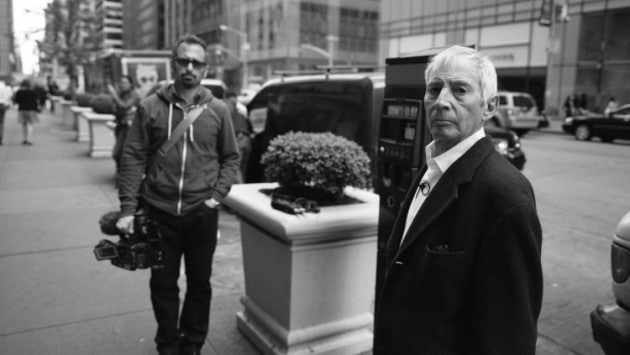 The Jinx was always going to be a fascinating project, a documentary series made by a man who directed a film based on the serial killer he was now interviewing in real life. The story of Robert Durst, was of course, crazy enough already, with three probable murders spanning the entire country, two unsolved, one acquitted, and the suspect is the heir to a multi-million dollar New York real estate dynasty.

Even though I’m too young to have followed the case in all its different iterations since the ‘70s, the case has been fascinating to follow all the same, and fills the True Crime void left by the recent conclusion of Serial, the podcast series also focusing on a mysterious murder.

Serial took the world by storm, as its painstaking account of a man, Adnan, jail for murdering his girlfriend was an exceptional mystery everyone was eager to try and solve by proxy. But after twelve episodes, there were no firm conclusions to be drawn. Adnan remained in jail, and though evidence didn’t add up, there was no smoking gun to either free him or confirm his guilt. That left many disappointed, but given that it’s a true story, it’s not as if the podcast could simply fabricate some magic piece of evidence that would explain everything.

Yet, that’s exactly the sort of evidence that popped up throughout the course of the filming of The Jinx. In the second to last episode, the son of one of the murdered women, Durst’s old friend, finds a letter addressed to her from Durst that is written in the exact same way as the anonymous note that led police to her body. The handwriting, the misspelling of the city name, it was clearly the same person, and confirmed by forensic document analysis.

The filmmakers confronted Robert with the never-before-seen evidence, and watched him stumble through an answer about how he did write the second note but not the first. And yet when the two addresses were held up side by side, he couldn’t even identify which he’d written, and which he hadn’t.

The filmmakers were content to let him go after that, but before he left, Durst heads to the bathroom. Not knowing his mic is still live, he begins talking to himself like Gollum from Lord of the Rings, saying “Well, that’s it. You’re caught” then later, “What did you do? Killed them all, of course.” The show ends on that admission, and the same day, Durst was arrested by police for the murder of the woman the note was addressed to, quite a coincidence, given that the interview was recorded years earlier.

Durst’s admission is one of the most stunning events in TV history, in my eyes. It’s completely unscripted, and unexpected, and the kind of closure that everyone listening to Serial hoped to find.

I think Serial was overall the more compelling program, given that it was truly a mystery whether or not Adnan committed the murder, or if witness Jay was lying or telling the truth. There were compelling arguments for both sides, and people were truly divided on whether or not Adnan was guilty. Listening to all the episodes, I switched my own view many times, and in the end, though I don’t think there wasn’t enough evidence to convict him, I still honestly don’t know if he did it.

The Durst story is much more straightforward, and it was always really hard to believe that he didn’t commit the murders. The interesting part there was how he got away with them all for three decades, given that he was prone to stupid slip-ups like going on the run from the police, and being arrested for stealing a sandwich at a grocery store.

Durst’s wife’s body was never found, which makes a murder prosecution almost impossible. His friend was murdered when he was in LA, but though he was in the state, they couldn’t put him in the city. And though he stood trial for the murder of his neighbor in Texas, even though he admitted dismembering the body, miraculously, he got off on a self-defense claim, because they were the only two people in the room, and murder could not be proven. The trial was not about what he did with the body, but rather than intent to murder, and of that he couldn’t be convicted.

Yet there was never much doubt about the fact that he had committed all these murders, which is why seeing him interviewed for the show was such a chilling experience. The fact that he admitted as much in the closing moments was shocking, and took the documentary from well-made to an incredibly television experience.

Durst has escaped justice so many times before, it’s hard to know if this latest arrest will finally land him in jail for good, but The Jinx played a key part in getting him there, if so.