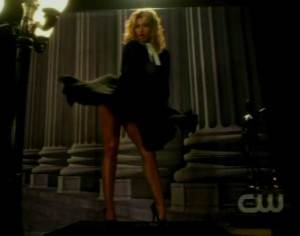 It seems like every week on Hellcats is another opportunity for a party or a fundraiser. This week, they’re throwing a party to launch their Hellcats calendar. Best of both worlds! Leave it to Alice to be in a threadbare bikini and turn her nose up at Marti’s choice of a supreme court justice outfit. If anyone can pull off a sexy supreme court justice, it’s our Marti! Mission accomplished, and even Alice had to admit it was “kinda” sexy.

I was going to propose that all of these parties and charity events leave little time for actual college work, but then Marti was back to work on the wrongfully imprisoned Travis case involving the local furniture salesman and possibly even Bill Marsh. I don’t think any amount of fiddling in Lancer supporters is going to bring happiness to the Hellcats, so I hoped the result of poking their heads into the case didn’t make them an even larger target for Marsh. I fear it may be too late to stop that truck from rolling. 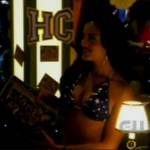 Speaking of Marsh, he’s even kept evidence on Alison’s boyfriend (and star football player) Jake. Whatever it is, it’s bad enough that he doesn’t want Alica to know. Shoot, Alice knows everything, so whatever he’s hiding must be a doozy. It was cool that she and Marti ended up working together to get into Marsh’s safe, given their less than cordial relationship on most occasions. What they found was, frankly, beyond what I expected. It lead to a great cat-fight though, and all shows with cute girls need cat fights!

We keep flirting with the pregnancy of Savannah’s sister, and I really don’t care. I mean, we don’t know her sister. I care about how it affects Savannah, of course, but overall I have very little interest. Wanda, decided to stick herself into the middle of the Savannah’s family situation by inviting her mother to the calendar party. Now, what woman in her right mind would meddle to that degree? There are some episodes when Wanda seems so sweet, and others where you just want to slam her head against a wall. Like tonight. The up turns Savannah’s mom. True to her as she is, the good ole southern woman blames Savannah for Charlotte being pregnant. As if one virgin sister wearing a sexy red outfit for a calendar causes the other to be with child. It’s not often that I hate a character on television, but Savannah’s mother is one of them. How Savannah became the lovely caring girl she is must be due only to her father’s influence, because her mother would have turned out spawn closer to Alice. 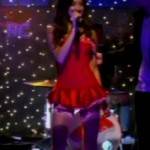 I expected Charlotte to be pissed that Savannah told their mom, but she and her sister have become so close again that it didn’t matter. That was heartwarming. And that Savannah takes her home because she needs her family more than ever amazed me. They are such good girls, and their mother is so blind. She should go blind for how she treats the lovely daughters she has. I was proud of the other members of the family for calling her out, and her dad’s hilarious comment. “Well, we are Baptists.”

And, Alice wasn’t bad this week. Week to week I am up and down on the characters. I guess that’s a good thing, because if they were predictable, it wouldn’t be nearly as fun to watch. For the second time in a month, a teen-focused show said a felony is only a felony if you get caught. Pretty Little Liars was the other. It’s like we’re all out committing felonies and breezing on by! Little did we know when that phrase was uttered just how close to the truth she was coming. Except this time, the wrong person got caught for the felony. Alice’s reaction to the entire fiasco was unexpected. The preview for next week gives no indication how this one’s going to play out, so we’ll have to tune in to find out!