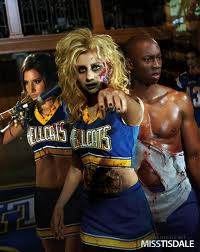 The Hellcats are back and not much of the big story we left off with was even an afterthought. I suppose they’ve decided it’s time to move on from the scandal. This isn’t necessarily a bad thing.

We did revisit Dan’s entry into film school. He used the Hellcats squad for his entry film, a fun take on a popular genre of today – Zombies! Marti was zombified and Savannah a republican hero against the walking dead. The way they’ve slowly brought Dan into the group and into Lancer made his story all the more compelling. I loved that everyone was willing to help with his dream to get into film school, as he had assisted with their dreams of competitions in the past. They had a damned good time doing it, too.

Dan lost all hope of film school when he talked to a couple of the other students, and watched the winning “film” from the previous year. Savannah doesn’t allow him to wallow and submits his entry. After a joyful viewing, Dan stood proud and shared his views of what film means to him. It was a great little speech, and I wonder how closely the Lancer film school followed the actual application process. If movies like the perfume commercial crap Dan watched are what get film students admitted, then I understand the lack of good entertainment in theaters these days.

Dan and Savannah are now a strong couple, and his friendship with Marti is no longer a barrier to their being in love. It works. I’ve wondered if the original intent was to have Dan and Marti as the endgame. The sweet chemistry between Ashley Tisdale and Matt Barr makes any infighting seem pointless. We need Dan to bring Savannah to life, Marti has no need for a man to find her strength. 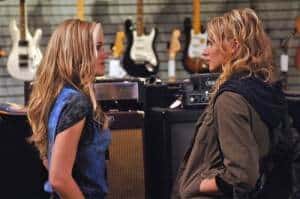 We finally heard from Wanda the story of Marti’s childhood, but only after Marti tracked down her dad’s guitar picks and a 15 year old play set at a local guitar shop (and thus we were introduced to AJ Michalka, as Diedre – fun to see the sisters work together). Wanda left Rex to save her family from his drug abuse. Not the story a girl wants to hear about her daddy, but it was tempered when Wanda gave Marti her father’s guitar, which held inside the case a song he wrote about her on the day she was born.

Marti is so happy and plays her dad’s song for an audience. I know it was written for a baby, but I’ve not been impressed with any of his songs thus far. They all seem just a notch above what might be heard from The Wiggles. She seems far more serious about her music than her dad did, but I can understand how it would make her feel closer to the man she never really knew.

I’m really glad Hellcats is back, but at the same time I’m worried that we are at episode 18 and we have no idea of its renewal prospects. I laughed when I heard the premise of the show last year, but damn if I wasn’t sucked in. I do not want it to end prematurely, as I think they still have a lot of stories to share. Tune in this Tuesday, 9:00 pm Eastern time on the CW to help those ratings soar!