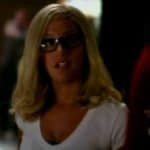 “Remember When” was not at all what I expected it to be. For some reason, I imagined a fun and bubbly walk down memory lane, but what I watch was the gritty reality that brought our girls and guys to the Lancer Hellcats. The shock comes in the form of Alice, perhaps showing, for the first time, her true colors. She is a Hellcat, and when it comes to loyalty, there is no contest. Hellcats win every time.

When Jake threatens the Hellcats for the video Alice and Marti stole from Bill Marshall’s office last week, she goes into protection mode. That allegiance even covers Marti, and to show her what it truly means to be a Hellcat, she arranges for the induction she never had. 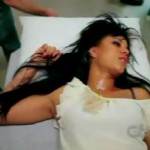 Alice, Lewis and Savannah all came to the squad in a less than cheerful light. Each of them were literally saved by the Hellcats. Alice nearly died of alcohol poisoning after her father blew off parents weekend at Lancer. She was Vanessa’s first recruit to rebuild the team into a winning squad. Alice says she misses the flying, but you know what she really misses is the feeling of family that comes with cheerleading. As we’ve learned before, Lewis came to the team after an injury and a refusal to follow Bill Marshall’s pay-for-play antics, and we had a flashback to his injury and refusal to go along. Jake was the center of the Lancer football universe even then. Savannah, too, came to the Hellcats in a life-altering situation. By leaving her family legacy behind she was giving herself completely to the team. Dyed hair and a fake name didn’t hide her talent and the Hellcats committed to her new life with Lancer.

At the beginning of “Remember When,” Marti needed her mother and she needed her friend. Her mother is always a wild card, and Marti broke down and called Dan (Dan!) for his advice and friendship. He wasn’t ready. That’s when she realized she was truly alone and Alice stepped in to show her what being a part of the Hellcats family was all about. She gives her life over to the Hellcats in a symbolic drop into the “bottoms.” 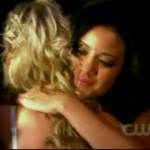 When Travis is gravely injured in prison and Marti tells everyone what’s at stake, her new family is by her side. The past, the trials and petty arguments she endured when she first joined, they were all in the past. The Hellcats family cannot stand idly by and watch corruption in their world, and not in their school. They’re in it to win it.

If you’ve followed my reviews of Hellcats, you know I’ve been up and down the field with Alice. This week, not only was the nature of Alice revealed, but so to the acting ability of Heather Hemmens, who plays her. She can sneer and sweetly smile in so many different ways that it was impossible to pin down her character. While I’m sure there will be more challenges and trying times ahead for the Hellcats (as there is with any family), I no longer doubt her personal convictions and honor. It was an episode a long time coming and executed with steadfast precision. A+