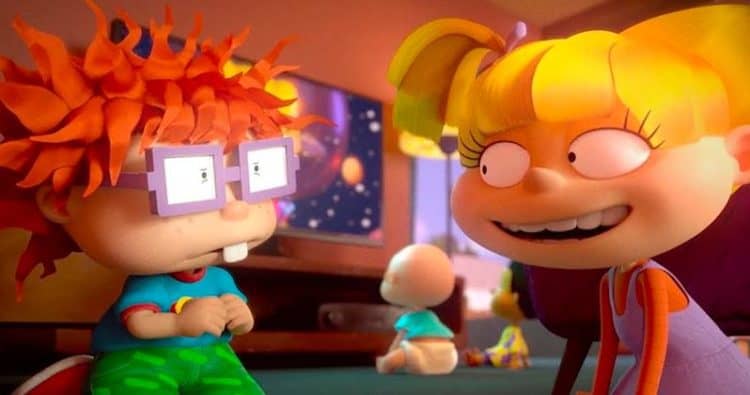 Poor Chuckie, he wants to please people but he’s always so unsure of himself. And of course, Anjelica never has that problem since she’s a big kid and in charge of the little ones, or so she likes to think. Rugrats is coming back and the animation has been switched up in a big way since days of 2D animation are still around but they’re swiftly becoming a thing of the past with some shows. This spring the Rugrats will be making their way to Paramount+, which is rounding up as many programs as it can find apparently in an attempt to be a powerhouse as it switches over from CBS All Access on March 4th. One can imagine that the Rugrats, which has been taken back to its original form despite the animation, meaning that the kids are still little and haven’t grown up yet, will be one of Paramount+’s more anticipated shows since this was one that people happened to enjoy quite a bit when it was featured the first time. As with a lot of cartoons that were released around the same time it was stated more than once that were there were adult elements within the series that a lot of kids possibly wouldn’t understand, but that adults could point out quite readily.

It’s easy to wonder if the same thing is going to happen in this version, though some might want to think that this might not be the case considering the ‘woke’ approach to programs these days. The trick with that however is the fact that as ‘woke’ as everything imagines itself to be, there are still plenty of programs that have controversial content if one looks closely enough, and even animated programs and kids’ shows are filled with roughly the same types of ‘issues’ that people today continue to point out in past programs and movies as they state that such things couldn’t possibly happen now. It’s enough to make a person want to laugh at a lot of folks that say such things if only to remind them that as they’re pointing out the less than virtuous ways of the past, they’re missing the fact that the same type of material is still making its way into many programs that they appear to have little to no issue with. But getting away from that, Rugrats has always had some sort of hidden issue in it that people have noticed and simply let go of, since enjoying the series has always been the more important part of the show and noticing everything within it has been kind of a dirty secret that a lot of people know about but don’t really worry over.

Paramount+ is going to be coming into the streaming wars with a great number of prospects that should be able to elevate the site in a big way as it could become a serious contender that might eventually be mentioned alongside Amazon, Disney+, and Netflix at some point. It’s a little premature to say that such a thing will happen at this time since the big boys of the streaming wars are still well ahead and not stopping for breath as things continue to roll on and on. But with the roster that Paramount+ has coming it’s easy to think that the site will be able to contend with just about any other site when it comes to content and what it can offer. Some sites offer everything from family-friendly material to the most controversial movies and shows that have hit the airwaves today, while some appear to stick to material that’s mostly suited for adolescents and up. Everyone is doing what they can to beef up their sites at this point as things continue to heat up and the future of cinema is starting to look a lot more promising than last year while the future of streaming is definitely heating up as well. Which one will do better in the months to come is hard to say, but right now it would appear that Paramount+ means to do whatever it can to make certain that it’s going to be taken seriously since the programs and movies it’s taking on at this time are already drawing a lot of attention, as the newest incarnation of The Stand ended only a short while ago, and many other programs are on their way to help things along.

It’s going to be a lot of fun to see the Rugrats back in action since a lot of us were still young enough to enjoy the program when it was first released on the air, and hopefully not much will have changed since people are bound to anticipate seeing new material as well as familiar stuff that was highly enjoyable the first time around.