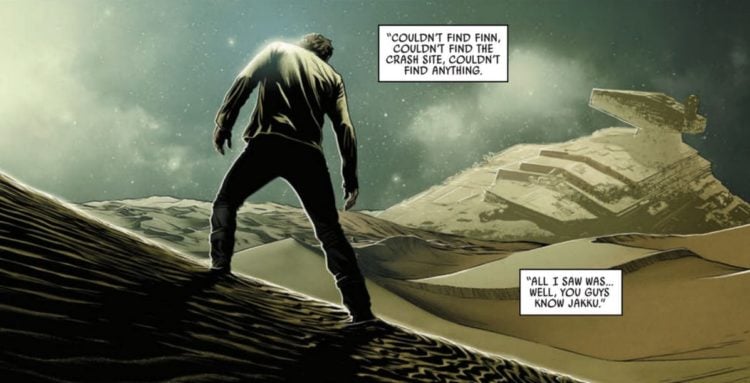 Did you ever wonder how Poe Dameron managed to survive the crash landing that placed him on Jakku, or got back to the Resistance at all? Some people might pass this off as the kind of thing that’s not too important since it wasn’t shown on the screen, and to be honest a lot of them probably wouldn’t care to hear the whole story since there have been so many people that are down on the new trilogy after episodes 7 and 8, especially after 8. But the story is actually kind of interesting since it does go into some detail about how Poe survived and how he made his way across the barren desert of Jakku and how he finally found his way back to the Resistance.

It’s the kind of luck you’d expect from someone like Han Solo really, but perhaps that’s a part of the gap that Poe Dameron is meant to fill.

His jacket was jammed in the ejector mechanism.

However it happened this is why he couldn’t eject and why he could have died in the crash as he and Finn were headed straight for Jakku. Finn’s ejector mechanism worked just fine, but Poe’s malfunctioned thanks to being jammed by his jacket. This should have killed him, but some kind of lucky bounce ejected him from the cockpit when he crashed and went sprawling into the sand where he passed out for a while without being noticed by Finn when he came to and found the wreckage. Of course it could have been that he regained consciousness before Fin and headed out earlier, but in any case he wandered the desert for a while and Finn took his jacket, believing he’d been killed. Upon reuniting with Finn he allowed the other man to keep the jacket, most likely glad to be rid of it since it seemed to bring bad luck.

Poe had a run-in with a scavenger and then had to help her outrun a gang.

Jakku is a hard world and people tend to fight for everything so it’s not too surprising that gangs exist that attempt to loot lone scavengers whenever possible. By bartering as much as he could for passage to a civilized area Poe managed to run afoul of a gang along and had to take over the controls of the scavenger’s vehicle in order to get away. The idea that he was any kind of pilot didn’t seem to enter into the scavenger’s mind until he took the controls and showed her just what he could do. While the vehicle he was piloting wasn’t agile or all that fast he did his best and eventually reached the small outpost that was really just a couple of tents in the desert. From there he started making his way to yet another area, known as Nima Outpost, where he heard tell of a female scavenger and a man that no one knew thanks to the commotion that had taken place shortly after their arrival.

From that point he finds his way back to the Resistance and things get back on the track that people already know.

Poe is an inordinately lucky character in that he takes some of the biggest risks and doesn’t always seem to reap the full reward. He’s not quite like Han Solo but he’s also not like a young Luke Skywalker, but he is almost like a cross between the two. He’s cocky, takes risks, but has a definite moral code that he tries to follow even if it means doing the wrong thing at times when he feels he can’t trust people for whatever reason. The comics have so far been filling in the gaps that the movies have left in order to tell the truth of Poe’s tale in full detail and address the blank spots that were more or less implied throughout the story at this point. By doing this Poe becomes a more detailed and far more in-depth character than he already was since explaining the man’s deeds before and after episode 7 will make him much easier to relate to and can flesh out the story of his life in a way that the movies haven’t been able to do fully.

With Poe now leading what’s left of the Resistance, with Leia backing him, there’s no telling how episode 9 is going to go and what future the Resistance has now that their numbers are so few. But one thing seems to be certain, Poe definitely doesn’t want his jacket back and is glad to let Finn have it. Apart from that he’s grown as a character since he’s still kind of cocky and headstrong, but he’s also far more thoughtful and not as willing to just charge in as we saw when Luke went to face Kylo Ren and his forces. Poe is becoming the leader that the Resistance needs.