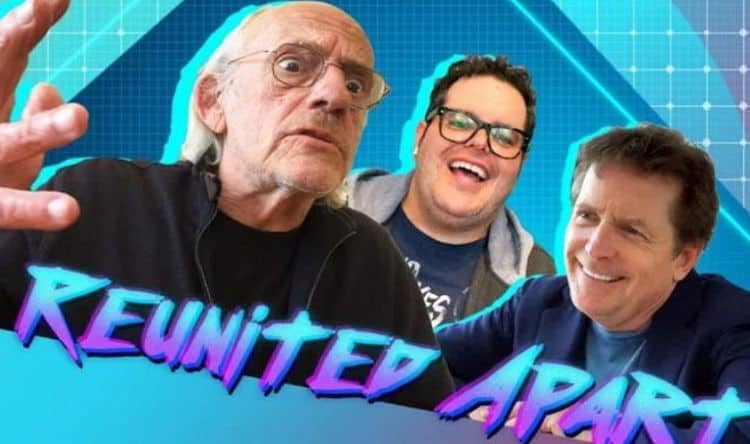 It has to be said that this Zoom meeting went about as it was expected since getting the Back to the Future gang together again was a kick, even if it didn’t include Crispin Glover, which isn’t too surprising. If anyone remembers, Crispin had a bit of a falling out with the creators long ago when they used his likeness for the second movie even though he wasn’t in it. So it could be that he just wasn’t interested in talking, though it is interesting that Claudia Wells, the original Jennifer from the first movie, did show up at the very end as though she’d missed the entire thing. Apart from being in that first movie it’s kind of assumed that Elisabeth Shue just took over and Claudia was kind of forgotten. Germain Lussier of Gizmodo had more to say about this. She had a pretty good reason to step aside however since during that time her mother had been diagnosed with cancer and she’d made the decision to help out her family. But it’s still important to recall that she did contribute to one of the greatest movies ever made, even if people tend to forget at times. That being said though it was great to see the people that did show up since apart from not having Crispin around the core group was back together since Christopher Lloyd, Michael J. Fox, and Lea Thompson, as well as a few others were there and that was about all that was needed really since they pretty much made the story.

As of right now though it’s obvious that Michael’s Parkinson’s has been progressing as he looks a bit rough and as though he can’t fully control his movements one hundred percent, though he was definitely lucid for the chat and was having a good time with everyone else. Ryan Parker of The Hollywood Reporter has more on Fox. Christopher has definitely aged quite a bit for a man that’s appeared old for so many years and yet proved to be every bit as spry as he needed to be. In a way, seeing these actors finally showing their age has really made it clear that time has indeed passed and that a lot of them are well past their prime. Even if there were plans to make another movie, which there aren’t since the creators have made it loud and clear that they’re not going to sign off on it, the original actors might have had to settle for cameos since it’s kind of doubtful that a couple of them would make it through the whole movie. It’d be a dream come true for a lot of fans, but it’s just that at this point, a dream.

Listening to the old cast talk about the movies though was something special as a lot of fans can probably agree since the lot of them stuck around for all three movies, two in Shue’s case, and made it something special for those that fully enjoyed the experience. If this movie ever gets the reboot treatment, and that’s a huge IF since the creators would have to have a serious change of heart, it would need to be adhered to in a way that would not only pay tribute to the original movies, but would prove to the fans that it was every bit as good as the first trilogy. Some might want to argue that it wouldn’t take much to improve on the third movie as it wasn’t quite the same as the first two, but others would easily claim that all three movies would need to be given the proper attention and a cast that would do justice to those that made the movies so easy to watch in the first place. For a lot of fans it was likely great to see Josh Gad bring this cast back together for a reunion of sorts, though just watching them come on screen was kind of a shock even for those that have seen how much the lot of of them have aged throughout the years. As far as being active in the business they’re all still very involved in the industry, but to a lesser degree in some cases than they used to be. After all, the lot of them used to be heavily involved as they were some of the most popular people in the business at the time, but after the passage of so many years and obvious changes that have occurred it’s easy to think that the lot of them have cut back on how much they do.

The rendition of Huey Lewis and the News‘ song “Power of Love” at the end was nice since it was the one song that a lot of people attributed to the movie and was actually a part of what helped it to become so popular back in the day, and a part of why it’s still so popular.