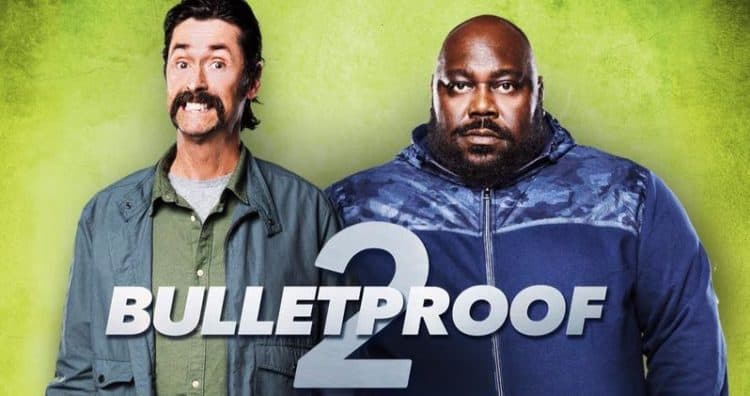 At first I thought this was a joke, no lie. Does anyone even remember the original Bulletproof with Damon Wayans and Adam Sandler? If you don’t it’s not that big of a deal because the movie wasn’t either. Don’t get me wrong, it was entertaining and even funny in some spots, but otherwise it was kind of a dud considering that that it’s been lost to the history books without much of a fight. If a person was to even mention it in a movie discussion there might be a handful of people in a fifty-mile radius that would claim to know what they were talking about. If you did watch the movie however then you’ll know that replacing the actors is a very, very bad idea and even making the movie is kind of a ‘huh?’ moment since it’s not a reboot and it’s not taking off after some other pair that might be somehow related to the original characters, oh no. The movie is actually taking after Archie and Keats from the original movie, only one would have to look at the actors in the first movie and then force themselves to think that things have changed so drastically since the 90s that Rock must have put on ten pounds for every year after the movie was released and Archie has somehow grown taller and become nearly anorexic compared to what he once was.

It’s hard not to laugh when Jeremy Dick of MovieWeb reveals that the director of the first movie wasn’t a fan, but it does appear that directors these days might just take what they can get since the likelihood that this sequel is going to do anything other than collect dust is hard to imagine. There are some movies you don’t make sequels to since they were fine being a one and done kind of movie, and then there are those that don’t need sequels because the original movie was just that bad or was something that people wanted to forget, which could be the same thing really. This movie though is something that doesn’t seem like a good idea from the get since casting characters that don’t look even a little bit like the originals and then giving them the same characters to work with is kind of pointless since it’s bound to have the same if not worse effect. Seriously, my brain is misfiring while trying to come up with all the ways to really describe how bad of an idea this is, especially since I do try to give a lot of stories the benefit of doubt before saying whether I think they’re a good attempt or not. This just doesn’t feel like it’s bound to go anywhere and if it does it means that peoples’ standards have gone to an all-time low. The original movie wasn’t really anything special, but at the very least it was something that could allow the creator to hold his head up as he claimed that he tried. Sandler and Wayans were at least funny, this just looks like a train wreck waiting to happen. Both of these actors need a solid lead to really come together in any project, and unfortunately there doesn’t seem to be one in sight.

Maybe I’m being unfair, maybe we should give the movie a chance before trying to shoot it down and condemn it while tossing dirt over the crater in an attempt to get rid of the evidence and hope that no one can unearth it. But then again maybe it’s time for some folks to start admitting that not everything under the sun needs a sequel these days. Ever notice that? If there’s even a hint or a chance of something that can push a story forward, people are going to take it. Now I’m all for pushing stories forward, but unless there’s going to be some point to it or there’s a story that absolutely NEEDS to be told, it’s really not worth it. The original Bulletproof ended on a note that was kind of desperate and felt as though it would end on its own and in a way that saw Jack and Archie beaten but kept alive, and that was great. It was funny, it was a decent ending to a lackluster movie, but it was an ending all the same. This revival is just, well….wow. There are so many things I’d like to say but holding it all in is thankfully easy enough since the lack of emotional investment in this movie is a big part of why it’s not worth the effort to say as much.