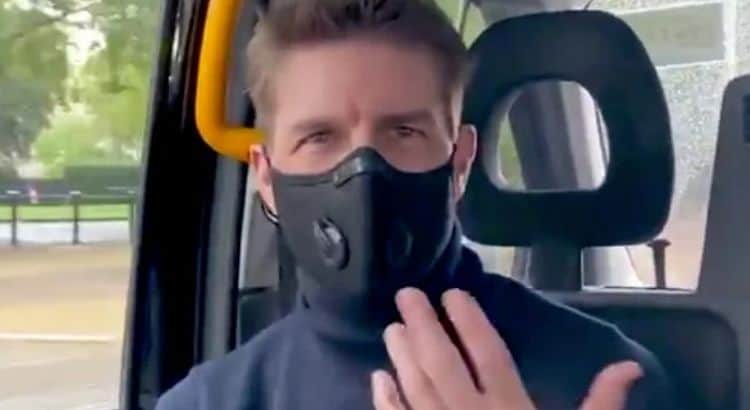 It would appear that theaters are opening up in London as people wear their masks and are allowed to sit and watch Christopher Nolan’s movie Tenet, which opened on the 26th and will reach the USA in early September apparently. Tom Cruise made his way over to London in order to catch the movie as he sat among the other fans and enjoyed the show, with his mask on no less. The Mission: Impossible and Top Gun star decided to take the time to enjoy the experience as other fans did as the theaters opening at this time is a big deal considering that they’ve been closed down for months now, a very tragic turn of events for a business that is entirely reliant on getting people through the doors and in the seats. It would appear that there isn’t quite as much social distancing going on in the theater as one might think is necessary, but it might also appear that a lot of people are still wearing their masks, which sounds like it’s just fine when people are protesting and going to the store, but causes people to freak out on a regular basis when it’s considered possible anywhere else. At least this was a positive experience since it sounds as though Tom enjoyed the movie, as did the fans.

Despite agreeing with Nolan on this, it does sound a little bit presumptuous to state that his movie really needed the theater experience to make it that much better for the fans. It’s true that some movies are simply better in the theater and tend to lose something once they come to home video or to a streaming network. The quality that a lot of movies have in the theater is a little diminished when it changes from the big to the small screen, even if a person has a home theater system that can nearly recreate the experience that so many people love the theater for. Going back to the movie theater is bound to be a big deal for a lot of people that have been missing it since as many folks would admit it’s one of the ways to get out of the house and just go and enjoy an afternoon or evening while getting to watch a new movie that everyone’s been waiting for. Plus, there are a lot of movies that are waiting to come out that people are psyched to see, and having the theaters open again would be a huge up for a lot of people, mostly those that work in the theaters and need their jobs back.

It’s kind of a wonder if celebrities are really worried as much about this since their whole bottom line isn’t exactly hurting despite their movies not being made available just yet, but it’s likely that they too want to get back to as normal of a life as they can since March might not have been that long ago, but the few months in between then and now still feels like a lifetime since a lot of people haven’t been able to do much. It’s a little harder to feel sorry for celebrities simply because a lot of them happen to live in mansions that offer a lot more room and they don’t tend to worry as much about money since many of them are set when it comes to their finances. But of course, celebrities are people as well and would eventually want to get out and experience life as much as possible since they too have been banned from going as many places as they desire and are having to follow the rules as much as anyone else, or so a lot of people are hoping. It might sound paranoid, but having money and influence can go a long way towards being able to flout the rules from time to time, and it’s a wonder as to whether any celebrities have tried to do this or have thought themselves to be above the common folk when it comes to various ways of life that were shut down for a little while. Again, that’s kind of a paranoid thought I won’t continue with, but it’s something to think about all the same.

But realizing that theaters could be opening their doors again, and will obviously be taking every precaution they can, is something that a lot of people are likely hoping to see in the coming weeks since getting out of the house and being able to take in a new movie is bound to be something that people will find highly enjoyable after everything that’s been happening in the last several months. While losing out on theater time during the summer is definitely a pain in the backside, it’s not the end of the world, at least to some folks.