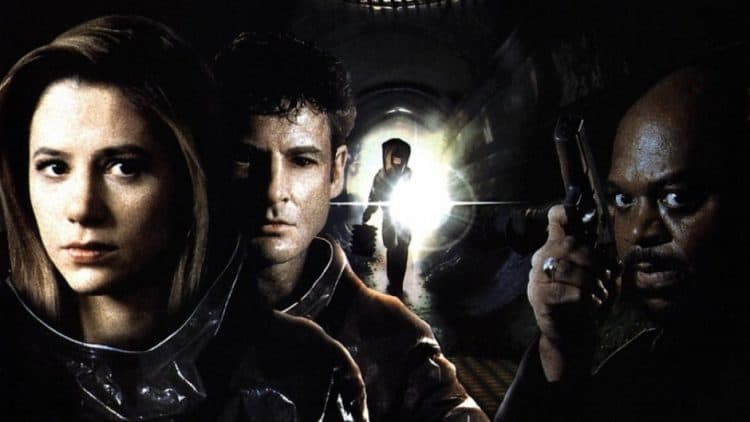 Mimic feels like one of those movies that could get better or be ruined by being turned into a series since the Judas insects were nothing less than terrifying given that they were human-sized and could mask themselves to walk among humans so well. It’s a very good answer to what happens when humans attempt to mess with biology and nature, as nature tends to bite back pretty hard, and without warning. What turns out to be a cure for a deadly disease and is made with the best intentions ends up becoming an affront to the natural order, which in turn prompts mother nature to take after her sister, karma, and become a real witch with a capital B. The story itself is fairly well done, and the movie did feature several talents that were already great but weren’t bound to break the budget since they weren’t technically A-list material despite the fact that they were well-respected in show business and still are in their own right. The plot was pretty simple, there was a problem that needed solving, the scientists solved the problem but in the process unwittingly created another problem. That’s fairly standard for a horror movie at times since the best intentions of any individual trying to do some good are bound to have some sort of blowback that they didn’t anticipate. Of course, this time things really managed to get out of hand, especially since with this movie it feels that nature became overly vindictive and decided to feature a creature that was a strange amalgamation of its own elements but was still something incredibly alien to those that had never seen it.

Bringing Mimic to the small screen though makes it feel as though the whole issue could be somehow trivialized, kind of how things happened with the sequels. It’s easy for some folks that are diehard Mimic fans, yes they’re out there, to say that a TV show might be the best and most natural progression to take, but again it really feels as though it could be a good or bad thing. Taking an idea like this that’s already been butchered by its own sequels and making it into something that’s an ongoing series could succeed or fail since it rests on the idea that people will want to see more of the idea and will support what they feel is worth the effort. In this case, giant bugs that could take over the city, and possibly keep going, is something that might take a lot of belief to make happen since the suspension of belief that’s required was big enough for the movie, but thinking that it could be successful series is akin to walking a tightrope without a safety net below and hoping that the wrong gust doesn’t come along to make things worse. It’s a long analogy, but the gist of it is that things need to be just right for the show to work, and as it stands it does feel that plenty of people are thinking that there might be enough in place to make this happen. But keep in mind, without the original actors it’s likely that it won’t happen the way that anyone is thinking.

Mira Sorvino, Charles S. Dutton, F. Murray Abraham, Jeremey Northam, and Josh Brolin are usually fairly busy at this time so whether or not they really want to come back for the series it might be that they’ll come back for a cameo and not much else. With that in mind though the series would need someone that can get the attention of the viewers just as easily since otherwise there’s a good chance that things won’t be seen as nearly impressive as they were with the first movie. Insect movies and TV shows tend to creep people out in a big way, but it’s still enough to keep them watching since being terrified is something that a lot of viewers want. But with this, well, it feels as though it could go either way as I’ve already mentioned, and as one could guess if it goes well then it’s going to be due to a great deal of effort and at least a little bit of luck. If it goes wrong though it won’t take much since this is an idea that was best kept as a movie, even if the sequels weren’t that great and nearly butchered the idea. Mimic is the type of movie that was great when it first came out and is still well-liked by those that enjoyed it and want to further the idea but can be knocked off the edge of reason very easily and hit with a massive flop if things aren’t righted quickly. But maybe it will be worth watching. We’ll have to wait and see.