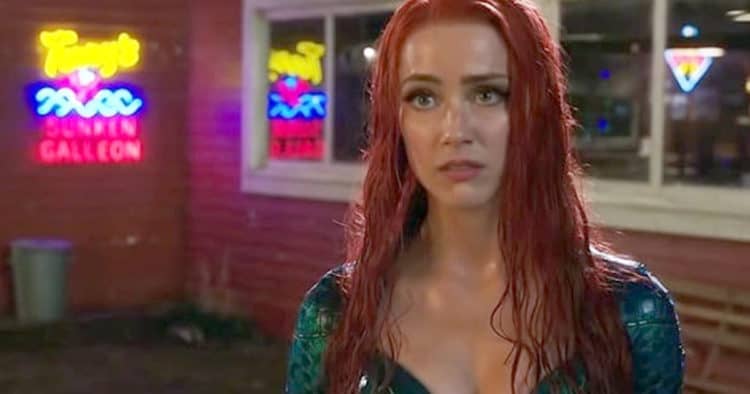 It’s hard to say this, but yanking Amber Heard from the role of Mera in Aquaman 2 wouldn’t really do much good. Fans want to see it largely because Johnny Depp, her ex-husband, has been asked to resign from his spot as Grindelwald in Fantastic Beasts 3, and as a lot of folks could tell you, people are more firmly on board with Depp being in the right on this one than Heard since it’s been revealed that she has openly abused Depp in the past and has continued to call him an abuser. The fact that these things have been left to roam social media and gain weight with several fans doesn’t help since Depp being asked to resign and Heard being kept on strikes a very sour note with a lot of fans. If the argument is whether or not it’s fair though, there is some merit to it since to distance themselves from the whole mess it would be wiser for Warner Bros. to simply ask both actors to resign and be quit of it at this time. There are plenty of folks that believe that Emilia Clarke from Game of Thrones would be a perfect replacement for the part of Mera, and it would work even better since she and Jason Momoa, who is coming back to play Aquaman, have worked together in the past and have very good on-screen chemistry, where Heard’s character feels a little more standoffish to some folks and not quite as natural when it comes to being able to bond with Momoa’s character.

But the point here is that the petition that’s been filed to keep Heard from coming back isn’t likely to be worth much since despite the signatures its been given, and the overwhelming number of them, the reality is that she can probably laugh this off and keep telling people that she’ll be showing up to star in the next movie since she has been shooting down rumors as of late that she won’t be playing Mera again. People are absolutely furious that she’s being kept on at the moment, especially since it doesn’t sound as though Warner Bros. has any intention of asking her to step down. According to Heard, petitions don’t do much since the opinions of the fans aren’t about to change casting decisions, which is a stance that might be vindicated unless fans are ready to tank the Aquaman sequel by not paying to see it, which isn’t bound to happen. The attitude that Heard is showcasing is a bit frustrating since it would indicate that she might believe herself to be a bit above the opinions of the fans that make these movies possible, which is true since without the fans wanting to see their favorite heroes and adventures on screen, there wouldn’t be enough demand for a single hero movie, let alone one that would cost millions to make. It might be necessary to remind Heard that she and her fellow actors exist in their current capacity because they managed to give the fans something they were willing to pay for, otherwise it could be useful to replace her in order to keep people happy and possibly reunite two actors that are known for working well together.

Some people would likely call for the cancelation of Heard, but this feels as though it would be overkill since, despite her issues with her ex, there’s no reason to ruin her career over this. But if Warner Bros. was to ask her to resign from the movie it might please a lot of people simply because it would appear fair since Depp was asked to do this, and as a result, it almost appears that Warner Bros. is playing favorites and is showing that they side with Heard in this matter when the best possible stance they could take is one of neutrality in order to avoid angering a large part of their fanbase. Will this keep Aquaman 2 from happening? Probably not. It probably wouldn’t stop anything if Heard is going to be kept around for a while, but it’s definitely going to get under the skin of many fans that have already voiced their displeasure. Fairness in Hollywood isn’t always as balanced as people would have it, but then again, neither are the stories we tend to hear about who did what to whom. Right now the whole Heard/Depp story is still a mess, and it’s only getting worse as Depp has lost a role in a movie and Heard is apparently being kept on. But at this moment it’s easy to simply move on and not worry too much about it since unless Warner Bros. is going to step up and ask Heard, in a fair and justified manner, to step away, then accepting the fact that she’ll still be there when Aquaman 2 comes along will be necessary.