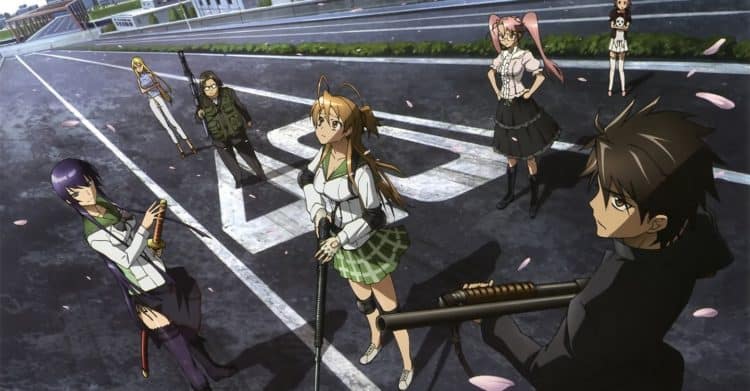 Have you ever heard of Highschool of the Dead? If you like manga or you’re interested in anime, you might very well pay attention to this very title. If you’re not so much into those types of things, you may not be familiar with it. That being said, some titles are worth checking out on their own and this just might be one of them. If you want to know more about it, go ahead and read about these 10 things listed below.

1. It’s also known by another name

Sometimes certain projects end up having more than one working title and that is the case here. Most often, this one is called Highschool of the Dead but every once in a while, you’ll also run across it being called Apocalyptic Academy: Highschool of the Dead. You can rest assure that despite the name change, it is the same project.

2. It was serialized for quite a long time

Typically, stories that wind up as anime are originally written as light novels and then serialized into manga. This particular story was written as manga that was serialized in a magazine and it lasted in that format for quite some time. Of course, there are also several volumes of light novels. When it was all said and done, this title was serialized from 2006 until 2013.

3. You might say that the idea for this title runs in the family

Sometimes, talent really does run in families and in this particular case, the volumes were written by Daisuke Sato and illustrated by Shoji Sato. That’s fairly uncommon so it makes this project somewhat special in its own rite.

4. There is real life tragedy involved

Sadly, in March 2017, Daisuke Sato passed away, leaving a portion of the story unfinished. Even though this title was serialized until after that death, it took some amount of time to finish the work that had already been begun. Once that particular volume had been finished, any additional work on the project was ceased. Currently, there are no plans to add any additional materials to the light novels or the manga that currently exists.

5. It’s about a popular topic

As far as topics go, this is one of the more popular ones. It’s about a group of people in high school that have to fight a pandemic which eventually turns people into zombies. This is a story that resonates with a lot of people because you see this type of story in television shows, movies and books all over the world. It’s no wonder that this is a title that is able to stand on its own two feet, even for people that don’t normally like this genre of entertainment.

When it was adapted into anime, it went under the control of Madhouse. This is good news because Madhouse is the one that usually handles most anime adaptations for these types of stories. They have an excellent reputation and they do a good job. By all accounts, people were extremely pleased with the job they did on this particular project as well.

7. So far, there have been relatively few episodes of anime released

If people had one complaint it would be that there weren’t enough anime episodes released. To date, there have only been 12 episodes that were released. There is enough material to release more and the hope is that eventually, that’s precisely what will happen. At the moment, things seem to be in something of a holding pattern so all fans can really do is wait and see what happens.

8. It’s considered part of the Supernatural or horror genre

Since the story is about zombies, it’s considered horror or Supernatural. If you have somebody that is sensitive to that sort of thing, you might not want to expose them to this title right off the bat but for most people, it doesn’t seem to be a problem.

9. There is an original video animation project attached to it

Madhouse even went as far as releasing its own original video animation project that was connected to this title. The exact title for that project was called Drifters of the Dead but it was based on this story.

10. It’s been released on both DVD and Blu-ray

Even the video animation project was released when Madhouse released the anime episodes on DVD and Blu-ray. Eventually, it was even dubbed for lease in the United States.