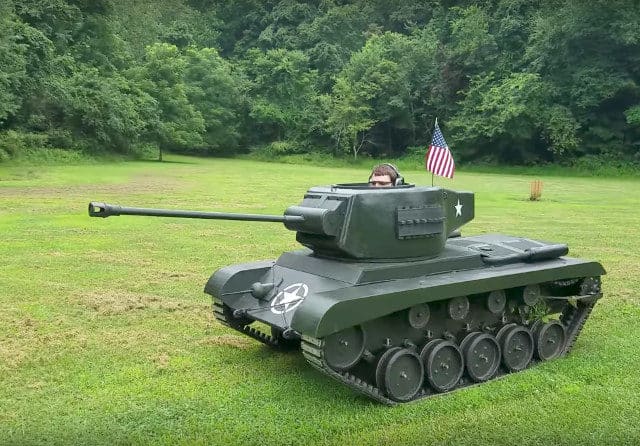 This kid managed to create, in 14 months, a working, forty percent scale WWI tank. I mean that really says it all, but there’s a lot more to it. Think about what it took to get this thing moving, and what kind of work it took to get to look so accurate. There’s no doubt that this young man had a little help along the way but the fact remains that he did a lot of it himself. That’s the kind of individual who will one of these days go on to help change the world, hopefully for the better we hope.

Right now I’m wondering just what kind of chassis this kid put together to make the tank run and what kind of engine is under the hood. It kind of sounds like a rolling lawnmower when it gets going but obviously it’s got a lot more agility and a great deal more power than an average mower. Plus, the engine would almost have to be just a little stronger to get the contraption rolling. It’s also highly impressive how he came upon the idea to build the tank in the first place, and the fact that he was so faithful to the design is eye-popping.

I kind of wonder if this was just a project he did on his own or if it was for something else. For a history class in high school this would be a project that might be hard to beat. But somehow I get the feeling this is just something this kid likes to do and that’s even more impressive. A lot of people his age wouldn’t even think to create something like this and he’s done it just on a lark it seems. That kind of go-getter attitude is awesome to see in this day and age when way too many are settling into the Gimme Era.

It would be nice to get more details though, especially on the engine and the dynamics of how he got the tank to move. Plus, I’d like to know how the big gun shoots and if he’s using a CO2 canister for it or something else that might be equally as powerful. Plus, how long did he study this thing before making it? The details are amazing and the form is just awesome. Â I can only imagine how many hours he spent throughout those 14 months trying to get every little detail as accurate as he could. Oh sure there are a few things that look a bit rough here and there but that doesn’t take away at all from the fact that this kid MADE HIS OWN TANK.

It stands to reason that this guy might actually make a fine engineer or have a future in some equally impressive field when he gets older. Something like doesn’t need to go ignored, nor could it possibly mean anything but that the kid is uniquely talented and should be given a shot to show what he can do in a real world setting for a major company. If nothing else this should be added to his resume for the future so that people can understand just what he can do.