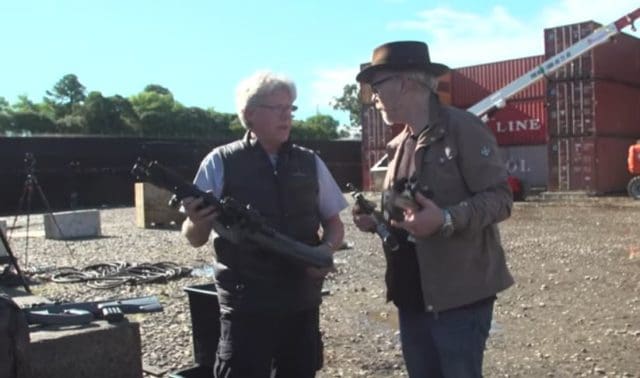 Adam Savage is back with another awesome episode of Tested.Â  On the set of the upcoming Alien: Covenant,Â  Savage learns about the array of prop guns and knives used in filming by production armorist John Bowring.Â  While seeing weapons and effects are always cool, it’s Savage learning about spitting up blood that’s the true highlight. Adam stops by the breakaway effects department to see how the various alien, human, and synthetic bloods and fluids are made and used to great effect on screen.Â  According to io9

You probably assumed the actor simply held the fake blood in their mouths until the cameras started rolling, but that limits how much they can spray and spit out. Hiding a hose in their hands which they have to hold to their mouths isn’t that convincing, and adding it all via computer graphics in post-production is pricey, and makes it harder for the performer to react appropriately on set.

As it turns out, the fake blood (at least the food-safe kind) is pumped into their mouths through a small brass tube, which is connected to a longer hose that remains hidden out of sight. The actor simply has to simply keep spitting out the blood as it fills their mouth, without looking directly at the camera while they flail around in pretend agony, which would make the tube visible.

So now when you see ungodly amounts of vomit, blood, or whatever other kind of slime coming out of people’s mouths in movies, you’ll know that at least one method of making this happen is a brass tube that the actor is hiding inside of their mouths.Â  I would think something less medieval would have been designed by now.