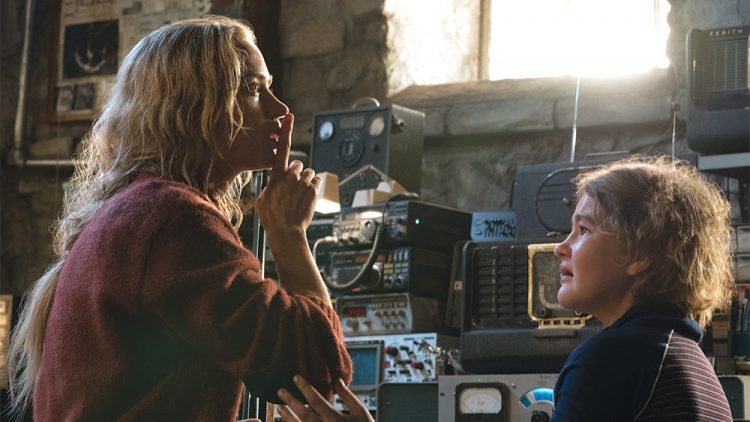 We rely so heavily on sound that it’s hard to imagine what it might be like to live in the utter absence of noise for even a moment out of life. Those that are born deaf or have gone deaf know far more about silence than many of us, but in the film A Quiet Place we were reminded that noise is an integral part of our lives that we tend to have trouble giving up. But the issue of being hunted by creatures that are heavily armored and hunt by echolocation is that sound becomes your worst enemy. In this instance sound becomes a burden that is not only unwanted, but is inherently deadly. That was just one of the ways that the sound editors were trying to master when it came to this movie as they wanted the audience to feel the absolute terror inherent within the silence, the menacing presence of something that couldn’t see you, but could create a picture of sorts using the auditory information it received from various movements within the terrain.

One of the more useful aspects of this movie came in the form of Millicent Simmonds, who is deaf in real life and plays the daughter of the couple in the movie, who is, of course, deaf. The use of her perspective led to the stripping of many sound effects and even the music to show just what life was like from her point of view. Not only did this give a unique look at the movie experience from her stance, it also intensified the absolute dread that came with the realization that no matter what she was not fully aware of the noises that she was making, nor the effect they had upon the terrain around her, unless she was being insanely cautious in her very movement. To create this effect the editors used a binaural microphone, a device that allowed them to hear what the character of Regan would be hearing thanks to her cochlear implants.

This microphone was shaped like a human head and managed to give just a touch of what it would be like to live life from this perspective. When you consider how sound is so crucially important to many upon many organisms throughout the world you can better appreciate just how it is used by other creatures to simply exist, and in this case to hunt. The monsters in this movie are absolutely horrible, bent on killing whatever makes noise and seeming to be little more than an armored carapace with teeth and shell-like ears that presented another challenge to the editors. It’s been described that they were given three primary modes, that being an attack mode, a calm mode, and a search mode. You can kind of imagine how each mode would be able to access certain parts of the creature’s hearing, and that they would be processed differently. For example the calm mode would likely include a passive sense of auditory perception, much like humans that are moderate to light sleepers but can be woke with a sound that is either loud enough or unknown to them and therefore triggers a movement into the next mode.

The search mode would be perhaps the most high-functioning of the trio as the necessity of this mode would be to collect, analyze, and categorize the various sounds that are being heard by the creature. Whatever basis they would be given to determine the importance of one sound or another it’s kind of obvious that they would only lock upon something if it produced the kind of sound that was capable of triggering the next mode, that of the hunter. The attack mode would be, by necessity it seems, the lowest-functioning mode, or close to the lowest-functioning, as its hearing would be alert and aware but not as strong as the faculties needed to attack. If you’ve ever been in the heat of action it’s likely that you find it hard to focus upon finer details in each and every moment. This is easy to dispute with such a creature, but it’s also likely that during an attack the creature’s hearing might not be as acute as it would be in the other two modes as from the gnashing of its teeth to the sounds it will inevitably make while attacking, there would be less receptivity towards auditory input. That might seem to destroy the thing’s ability to go after its prety, but given that a lot of humans would be making noises in their efforts to survive it’s fair to say they would be serving themselves up for the creature.

All in all the use of silence in this movie is a terrifying and very astute move since if any of us are being honest, absolute silence is a great deal more horrifying than overwhelming noise.