Home
Movies
How Every Film Noir Ends….Sort Of 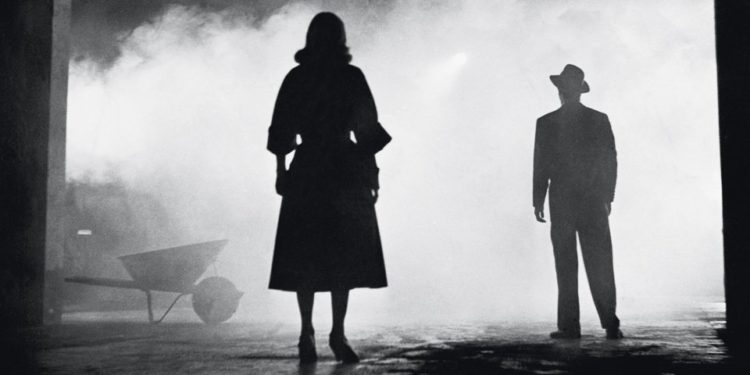 This is the general feel of how film noir tends to end, yeah? For those that aren’t really into this type of experience, it might appear this way since it does feel as though movies of this persuasion do manage to leave us feeling a little less than satisfied, but somehow satisfied that we’re less than satisfied. It doesn’t sound like it makes sense but it does in a very convoluted way. Some folks get a kick out of film noir since it is a style that can cater to those that enjoy this kind of gritty, grainy feel to a movie that isn’t as streamlined or bright and happy or even particularly colorful as so many other movies, but some folks might feel like they need a hot shower after this kind of cinematic experience if only because it leaves them feeling less than satisfied somehow. Yes, I know what I said, but everyone has their own experience when it comes to various types of cinema, and film noir sometimes makes a person feel as though they’ve been coated in something that can’t be seen but is felt, all the same, a sense of irony that adheres to a person and won’t leave until it’s scrubbed off. There is some appeal to film noir that a lot of people find attractive, but unless one is willing to dip into that same interest it’s bound to happen that it will be more than a little frustrating simply because it’s not what a lot of folks might fully appreciate when it comes to movies.

The movies made back in the 40s and 50s were a good example of this since they were able to showcase this cinematic style in a big way and made it a popular style that a lot of people managed to get used to since it was utilized quite often. But when really looks at the movies from that time period they have to remember that there wasn’t quite as much to choose from and the whole idea of the movies was that they told a story first and focused on everything else second or third. A film critic or film student would likely be ready to call me out and tell anyone just how film noir has influenced the cinematic culture of America throughout the years, but at this point, it’s easier to state that it’s something one cares about and finds interesting, or it’s something that can be done with or without since it’s not something that everyone really goes nuts over. The fact is that it’s not the biggest fad at the moment no matter how much anyone might disagree since it has its place and time just like anything and when it is needed it’s a style that many filmmakers know how to draw upon.

Many filmmakers don’t at this time though since like everything in Hollywood, this kind of thing goes in cycles and while film noir will always have a place and will have plenty of adherents that will keep it alive, the cycle of movies that are currently in production and are seen as popular at this time aren’t necessarily the type that would use this style all that often. This kind of style is what’s made movies such as Mulholland Falls, Dark City, Palmetto, and many others so popular in their own time, and has created a type of feeling that a lot of people lean into when they see it since it’s almost like a look back in time no matter how current the movie is. It’d be nice to say that it’s entirely adaptable to just about any movie since it is able to be used in various genres, but it does take a certain type of movie to really pull this off since you won’t be seeing it in a lot of big action movies or even modern-day horror movies, given the content and the feel of each project that comes along. Film noir works best with drama without a doubt and it’s seen to be widely accepted ever since men such as Humphrey Bogart helped to make it so popular back in the day. It’s not exactly something that manages to please everyone, but it’s interesting enough that plenty of people will at least take a look when they get the chance.

The best explanation of film noir is that it’s a style that one really has to be into before they can enjoy it since otherwise it’s just another style that adheres nicely to gangster and detective movies, which is why it works for Dark City despite the fact that the movie is science fiction. Typically one will see this style in movies that are extremely down to earth, but there are always exceptions.