Home
Video Games
How is the Apex Legends Map Changing in the Emergence Update? 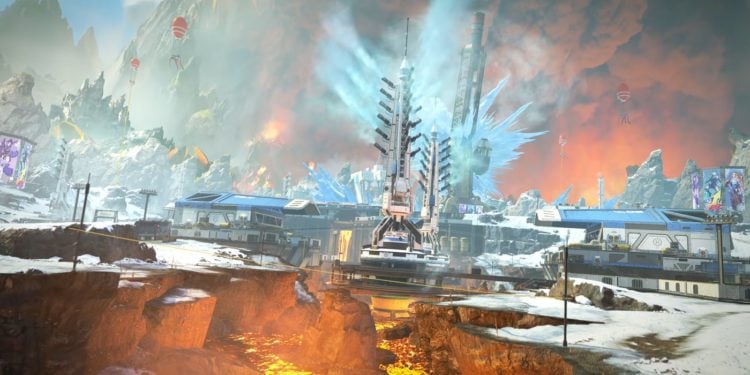 “A metamorphosis has come to World’s Edge. After months of aggressive mining by the Harvester, the land is overmined, overburdened, and pushed to its limit. The earth has fractured and erupted as nature is reclaiming what’s hers. Hammond is scrambling to contain the damage they’ve caused. They’re using weather controlling machines to rapidly cool the area to sub-zero temperatures at the Climatizer and building a Lava Siphon to stabilize the caldera. The struggle between the inevitability of change and humankind’s arrogant attempts to control that change can be seen across World’s Edge.” That’s how Respawn has described the upcoming Apex Legends Emergence map changes. They actually had Garrett Metcalf, Senior Level Designer on Apex Legends, walk us through the changes coming to the Apex Legends map in the Emergence update, so what exactly has changed?

Taking a look at what used to be the Refinery is no longer the Refinery. Instead, the Refinery has been wiped out by a molten lava fissure and replaced with a much larger POI called Climatizer. The whole idea behind this is that Hammond has constructed these massive cloud seeding towers to cool down World’s Edge, and the Climatizer is home to the necessary equipment for this process.

The planet has now fractured all the way from Climatizer to Fragment East, which has led a bubbling lava river to connect the two locations. With the crack in the north, there is no updraft air lift mechanics, but rather features a traversable terrain like all the other lava in the map and inflicts damage to the player if stepped on. This new crack should make for some more meaningful decision-making while thinking about rotations in the north part of the map, and should also lead to some “distinct combat chokes.”

Trains are coming back to Apex Legends….kind of. Gondolas will offer some of the dynamic gameplay that players loved in the game, and will provide a confined, safe passageway for you and your squad across the threatening lava and the POIs. Gondolas will be available exclusively in the Climatizer and Lava Siphon POIs. Speaking of Lava Siphon…

Sorting Factory is no more! The former POI has been swallowed up by a massive sinkhole and replaced with a large POI called Lava Siphon. In this POI, Hammond has constructed a facility to pump out the lava from the sinkhole and maintain the lava levels throughout World’s Edge. Here’s what Metcalf had to say about the addition of Lava Siphon into the Apex Legends map, “Mainly, we wanted to introduce a fresh new experience here at this POI. The goals were to break away from the traditional free-flowing layout that existed at Sorting Factory, and to introduce opportunities for chaotic, overlapping fights that stand out from other existing combat spaces in World’s Edge.” There is a massive lava Siphon building that is directly embedded into the mountain and offers a ton of options for close-quarter engagements, and we can’t forget the sinkhole. There’s a giant sinkhole that’s part of Lava Siphon and is fully traversable…if you’re willing to take a bit of damage. The gondolas will also be present in Lava Siphon with a much longer travel distance.

Unfortunately, a landslide has completely laid waste to the Train Yard. However, this location is still marked as a POI on the map, though it is now appropriately titled “Landslide.” Respawn’s goal with this change was to prevent the prolonged fights that previously took place around the Train Yard, and improve the flow into the tunnel linking to Fragment West. Landslide still contains the same amount of loot as Train Yard once did, but it’s just a bit more scattered and spread out now. The hot zone has also been removed from this POI.

Respawn has been listening to player feedback and is bringing back the older lighting of the map, while also putting a newer twist on it. The Emergence update for Apex Legends will display a brighter, more neutral time of day with a colder look overall. There’s also even more snow in the northern region of the map!

Respawn has also added a new rotation at the dead end of Overlook to give players a new option to rotate in and out of the location. They say that the change is minor, but think that it will be appreciated by the community.

Finally, there is also a new connecting rotation between Geyser and Overlook. This new rotation branches off from the existing central point of the cave tunnel rotation and heads north. This should improve the flow to and from the northern POIs and give teams another option to rotate through this area.

Those are all of the map updates that came to Apex Legends with the Emergence update. What’s your favorite change? Personally, I love the lava sinkhole in Lava Siphon.