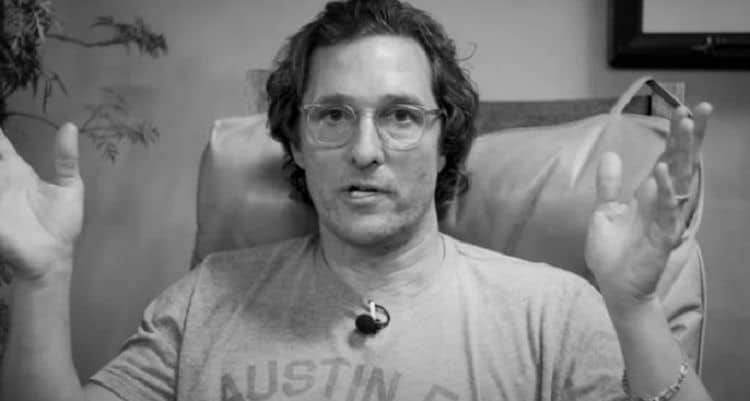 It kind of has to be said even though it’s probably been said over and over, Matthew McConaughey is a natural actor and he is one of the best in the business at what he does. I don’t mean he’s a natural in the sense that he’s so talented that he doesn’t have to read the script or that he trumps everyone around him just because he’s so great. No, not all. He’s a natural actor in that he reads his script, over and over as he looks for the best way to do something, the most natural way to make the scene appear as it should. He takes in everything and makes it feel as though the scene is actually happening in real life, creating something that feels so natural that it might as well be real for all that he puts into it. Those that he works with tend to make this feeling stretch out quite a bit sometimes and can emulate Matthew and even compliment him in such a big way that they end up becoming every bit as good as he is at times. It doesn’t always happen this way, but McConaughey’s acting is so on point most times that it almost feels as if he drags everyone into the world with him when he’s acting in a movie, pulling them into every scene in a kind of seamless way that, if one allows it, can make them feel as though they’re in the scene as well. Some might attribute this to great directing and great dialogue, and they wouldn’t be entirely wrong, but at the same time, Matthew still has the ability to draw people in since he gets so into the scene and his character that it’s tough not to simply fall into the act and enjoy it no matter what else is going on.

The guy has a very charismatic way about him as well since from his southern accent to the very calm and down-to-earth tone he uses so often he’s one of those individuals that a person could likely feel comfortable with even if they didn’t happen to like him that much. Yes, there are those people out there that don’t really care for McConaughey, those poor dears. Anyway, the process that he goes through when trying to get into a script, not memorize it mind you, but get into it, is to keep reading it over and over and wonder what he might need to do in order to make a scene happen, to make it breathe, to make it feel natural, smooth, and basically as though it’s really happening since, in a sense, it is. As one of the best actors in the business right now McConaughey is by far and large one of those that people feel almost instantly comfortable with and have no issue listening to since the guy is just smooth as silk and yet can deliver a role, however rough or charming it is, without any hesitation at all. This is a guy that studies what he’s supposed to be doing and takes his job seriously but doesn’t become so obsessed by it that he stresses unduly over anything. At least it doesn’t appear that he does, and if this does happen then he’s pretty good at hiding it.

Plenty of people have idolized Matthew over the years and it’s fair to say that some still do and some will continue to do so since he’s still around and he’s still one of the best at what he’s been doing, which is why it’s so easy to talk about him in such a positive light. He’s definitely had his missteps in the past with certain movies, just like any other actor, but even with the few truly bad movies he’s ever done one has to admit that Matthew is still fully capable of coming out smelling like a daisy since the guy is just too good and can still shine when the movie around him feels like its crumbling into the mud. That’s a truly talented actor that can come out of a bad movie and still keep walking forward without having to worry about their reputation after starring in something that people couldn’t stand. It’s also a mark of how much faith people have in him since there have been a couple of movies in the past that Matthew starred in that were terrible from the get-go, and yet here he is today, one of the most celebrated stars in show business and someone that has done so much in his career that it doesn’t feel as though there’s much else he needs to do in order to stay on top. He’s not done, there’s no concern there, but after so long of being one of the best in the business, one has to wonder just how he might up his game even more.