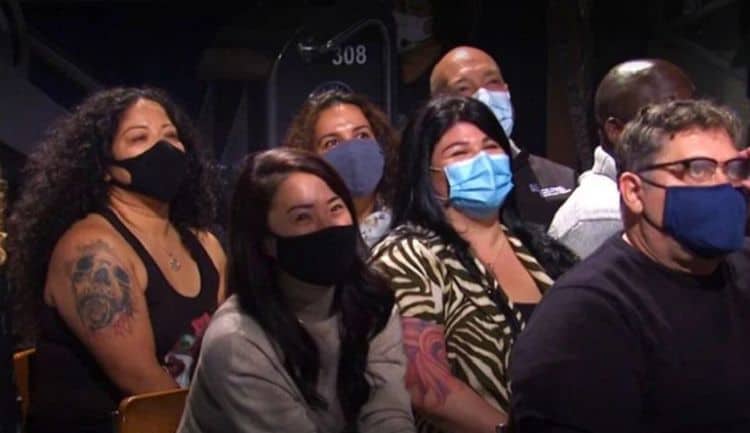 Some folks would call this a shady move on the part of SNL, others might call it brilliant, but it did manage to get them the live audience they wanted so one can argue that it was innovative at least. Saturday Night Live has been suffering just as much as any other show in the last several months considering the fact that they couldn’t have a live audience, which has been a big part of their show for a long time now. But they managed to find a loophole that has allowed them to bring in audience members aren’t technically audience members since they’re being paid as cast members, albeit only $150 for showing up. Still, that’s not something that many people are going to say no to since they get a show and some money in their pocket. It is a fairly smart move on SNL’s part since their audience is typically one of the many things that they happen to be known for and it’s a part of the show that people happen to play up to. But the idea of paying people off so that they can have this one aspect of the show is still kind of suspect since it means they squeaked past the mandate that New York currently has concerning no live audiences. So long it’s not illegal though, who’s going to say anything?

What it does mean is that procuring an audience could become costly if this is how SNL wants to play it, and in some way, it does feel as though someone might speak up and attempt to get this practice banned simply because sitting around with facemasks on still isn’t the best way to keep people from getting sick. It would be so easy to go on a rant at this time about facemasks, who’s wearing and them and who’s not, who is being safe and who only thinks they’re safe, and so on and so forth, but the coronavirus and its time in the news has been played so much at this point that it would be just a bunch of noise. Those at SNL did manage to find a way to make things work and as a result, they’re pushing forward and might have to find something else they can think of to do when it comes to a live audience. It’s fair to say that they don’t want to work with a laugh track at this time and a lot of people can’t blame them since SNL has been able to have a live audience for quite a while, but the coronavirus has made things change in a big way, and trying to keep everyone safe and sound at this time is a primary concern.

If SNL is keeping the people at least six feet apart then perhaps it’s not such a bad thing, but if they’re trying to pack them in to fill every seat then it might be that they’re shooting themselves in the foot. It wouldn’t matter if people are being paid at that point unless they’re willing to wear a full paper gown, a face shield, and a mask, as well as gloves. Then it might be deemed safe enough to keep them there, but of course, with that many people it’s likely to get pretty stuffy since body heat is a pain in the backside when it begins to build up, and that many people sitting around each other is only going to make it worse, likely to the point that not even a paycheck is going to keep the people seated. It does make me wonder at this time whether SNL is really dependent on their live audience or if it’s just poor programming that’s been keeping them from being the comedic giant that the show has been in the past. Opinions do differ pretty wildly when it comes to this show since the idea of returning to the glory days has been something that many people discuss, but some folks are convinced that this hasn’t happened yet.

Whatever happens with the show in the coming days it’s become obvious that they’re ready to get up to a few tricks in order to do what they need to in order to keep the show running and keep every aspect of it alive as much as they possibly can. SNL has been known to be a bit controversial at times in the past but while this might feel a bit shady it does appear to be legal and isn’t bound to ruffle too many feathers so long as it doesn’t worsen the spread of the virus. Of course one can bet that if someone really has an issue with it and wants to get in the ring with SNL over the matter, it’s bound to happen.