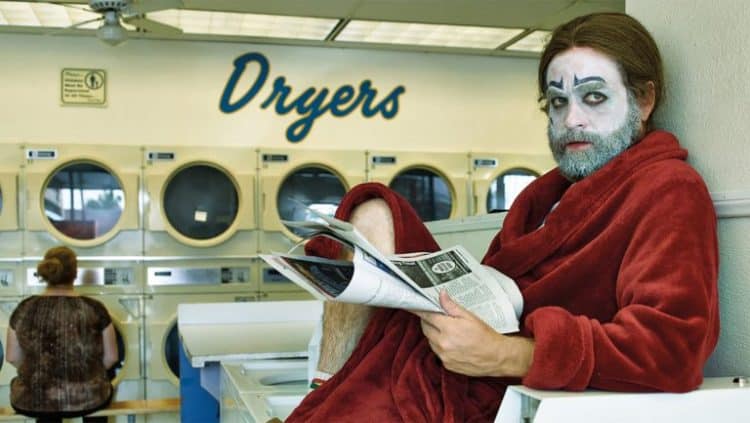 Baskets is a comedy that started up in January of 2016 and has continued running to the present time. Humor-wise, it is an interesting combination of black humor mixed in with a sense of the surreal as well as a fair amount of drama. As for its story, well, suffice to say that it is rather unusual but that much more interesting because of it.

In short, Baskets is centered on twin brothers named Chip Baskets and Dale Everett Baskets, thus explaining the name of the show as a whole. Chip Baskets is someone who wanted to become a professional clown, which is why he headed to Paris for the purpose of studying at a prestigious Parisian clowning school. Unfortunately, he has failed to secure the desired degree, with the result that he is now stuck as one of the rodeo clowns in his hometown of Bakersfield, CA. Meanwhile, Dale Everett Baskets has chosen a very different path in life, as shown by how he starts out in the series as the Dean of Baskets Career College. Perhaps unsurprisingly, both of the twin brothers have serious issues, which can flare up when the two come into contact with one another.

Besides the Baskets brothers, there are a lot of other characters with their own stories as well. For example, the twin bothers have a mother in Christine Baskets, who is played by Louie Anderson. However, it is important to note that the crux of the character isn’t because she is being played by a man. Instead, it is because her sillier characteristics are the products of a lifetime’s worth of disappointment, thus contributing much to the show’s sense of black humor. Meanwhile, Chip is married to a French woman named Penelope, who has no real interest in him but is instead married because she wants to live in the United States. As such, Chip’s one real friend is an insurance agent named Martha Brooks, who holds said status because she is one of the very, very few people who can put up with the fact that he is rude and unsociable much of the time.

On the whole, Baskets is pretty standard in some ways but pretty non-standard in others, thus making for a curious combination of the familiar with the unfamiliar. With that said, it has been running for a while, so it should come as no surprise to learn that it has seen a fair amount of change over the course of its existence.

How Has Baskets Changed Over Time?

For starters, Baskets isn’t episodic like a lot of comedies out there. As a result, there is a clear sense of progression for the characters as well as their stories over time, though that isn’t necessarily to say that these characters do so at a fast pace. In particular, there are some people who think that Chip will be becoming more mature in the current Season 4. Something that would be a huge change-up because so far, Chip’s personality has been more than a bit childish in the more petulant senses of the term.

Of course, other characters have seen their share of change as well, with a fair number of them having had more progression than the relatively static Chip. One excellent example would be Christine, whose relationship with the carpet supply company owner Ken has set them on a course to getting married at some point in the show’s future. Another excellent example would be Martha’s increasing assertiveness thanks to the assistance of a life coach, which is in turn, one of the factors that are pushing Chip towards his own personal growth. However, one of the most notable might be that of Dale, whose alienation from his family has combined with his transformation into what one might call an “enthusiast” of guns as well as the countryside. On the whole, the characters of Baskets have seen considerable change, which promise still more transformations in the times to come as well.

With that said, the single biggest change to Baskets might be the change to its top leadership. In short, the show was created with the input of not one, not two, but three separate individuals. One of these three individuals is Zack Galifianakis, who plays both of the twin brothers. Another would be Jonathan Krisel, who remains involved with the making of the show as its director as well as its overall showrunner. Finally, the third individual is Louis C.K., whose involvement has come to a close.

After all, Louis C.K. was one of the figures in the entertainment world who was accused of sexual misconduct. Moreover, his was one of the cases in which the claims were proven to be true, seeing as how he admitted that the accusations were so. Due to this, Louis C.K.’s business relationship with FX was terminated in November of 2017 so that the channel could protect its brand, which happened to include the comedian’s involvement in Baskets. Nowadays, Louis C.K. has actually somehow managed to make a relatively low-key kind of return to entertainment, but it seems pretty safe to say that he won’t be getting involved with Baskets again.

It remains to be seen what will happen in Season 4 of Baskets. This is because the season is still being broadcast at the moment, which promises to continue throughout the summer because there will be ten episodes for ten weeks. However, it seems certain that the characters of the show will continue to change as the show continues to move forward, which should make it that much more interesting for the fans while still hanging on to the particular and peculiar sense of humor that has been honed over the passage of time. Besides this, there is little point to predicting other potential changes until the season is over, which should provide more basis with which to support further speculation.