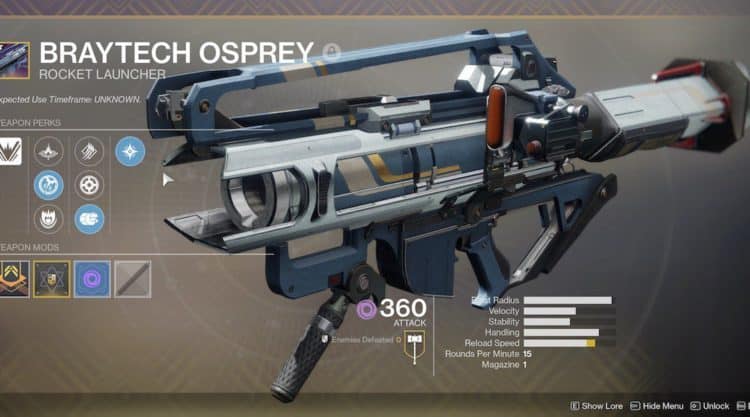 Just before Christmas, Bungie delighted fans of Destiny 2 by giving players another chance to get the coveted Braytech Osprey rocket launcher. For those working hard to achieve the Wayfarer Title, it’s kind of a big deal. It’s only the second time since the release of expansion pack Forsaken (in September 2017) that Strange Terrain has been a Nightfall Strike option. Players must earn the Braytech launcher before they can get the Wayfarer Title. And, since Bungie has been particularly stingy with opportunities to do this, we recommend diving into the quest whenever and however you can. Nobody really knows when the next chance to get a Nightfall Exclusive reward will come about – get it done, get your level up and create some carnage with that rocket launcher. We’ve got some advice on how to farm the Braytech Osprey in Destiny 2. Keep reading for an effective strategy and game plan.

How to Get That All Important 100K Score

What we do know for sure – because Bungie says so – is achieving a score of more than 100,000 in Strange Terrain Nightfall Strike automatically raises the odds of earning a Nightfall Exclusive reward. It counts towards any run and the final score doesn’t matter; you’ve just got to surpass that magic number once. It gets flagged as a notable achievement and your chances of getting the Braytech Osprey rocket launcher shoot up.

Perhaps the biggest obstacle to this achievement is the length of the strikes. Strange Terrain is fairly short so you need to go all out and do a lot of damage. To totally stun those score buffs and get a super result, try the Extinguisher and Match Game mods. You may also want to start with a 50 power level disadvantage. It’s the most successful combo we used when attempting to beat this challenge.

The final strike boss is Nokris. He relies on solar damage for his attacks which means he’s vulnerable to mods like Void and Arc singe. Even with these mods equipped, however, he’s going to give you a hard time. It is possible to defeat him quickly but it’s extremely difficult. The best way to beat Nokris is to take your time, play it safe and work those evasion and avoidance tactics to your advantage.

Don’t throw the Knights’ orbs at the crystals. We repeat, do not throw dropped orbs at the crystals. You’ll be limiting your ability to score maximum points. The Ritual Knights keep respawning throughout if you pick up and keep the orbs. Yes, it makes the level a little trickier but Knights are worth a lot of points. If you want to smash that 100k ceiling, grab every opportunity to beat on these guys.

Your first objective is to get the 100k score. This means extending the fight with Nokris for as long as you need to rack up those points. Once they’re in the bag, don’t wait around – try to dispatch the boss as quickly as possible. To finish your Strange Terrain strike and get the rocket launcher, add Heavyweight to your mods. When combined with Arc Singe, it should give you the offensive edge you need to complete the level.

We like the Wardcliff Coil rocket launcher for this part of the game but you may prefer a different class combination. In our playthroughs, we’ve found two of the best team weapons to be a Warlock with Lunafunction Boots and Well of Radiance or a Titan with Hammer Strike. Don’t forget, once that 100k score is in the bag, there’s no longer any need to extend this fight. If you can, avoid the other foes and focus on killing Nokris. If you’re careful, you can dodge most of them.

You can land a punishing blow by simply being in the right spots. Stay close to Nokris. Get your warlock to unleash a Well of Radiance as soon as Nokris is distracted or taking a rest between attacks. It’s useful for the titan to hang back for a few moments as their attack is especially damaging when it follows the Well of Radiance. When the Well and titan melee link, you can join the fray and hit Nokris with a Wardcliff Coil shot.

It can be tricky to get the hang of but, if you do this correctly, you get a chance to fell Nokris in one attack. He should get knocked down before he can parry and your job is done. As we said, it’s not the easiest strategy in the world. You may need a few goes at this. Get the hang of it though and we promise you’ll be on your way to the Osprey rocket launcher and that legendary Wayfarer Title.