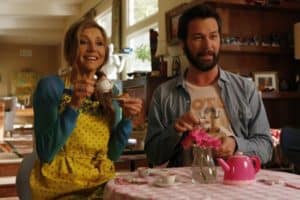 Julian is over inspecting the brown stuff underneath Polly’s bed (which turns out to be cupcake crumbs and not anything toxic) when Natalie shows him a picture she had been working on. It’s of herself, Polly, and Julian at Golden Bear, a place about 100 miles away where they used to go camping. However, since the divorce, they haven’t beenÂ and Natalie is itching to go. While Polly tries to tell her that the bears took back the park and are currently drinking and eating honey, growling to each other in approval at the recent election results, Julian offers to buy her a plastic bunny that poops jelly beans in hopes of distracting her.

She does accept his offer, but later, she tells Polly about a girl in her class named Betsy who called her stupid and told her that she has ugly hair. Polly wants to tell one of Natalie’s teachers about the problem, only to be stopped by Julian, who doesn’t want his daughter to be a snitch. They end up having to see the teacher anyway, though it’s not for the reason they think. Mrs. Fogelman calls the two into school that day to inform that there is no Betsy – Natalie has imagined/made up her bully. There’s to be an evaluation soon to see where her mind is at and whether they need to move her to a different class, something that upsets Julian to the point where he suggests psychologically implanting a bigger bully into Natalie’s mind that would take Betsy down. Polly, however, determines that Natalie is in need of attention like she was at that age and unlike Elaine, she’s not going to ignore her daughter.

They decide to have a Downton Abbey-style tea party, complete with exaggerated accents and chocolate milk, to help cheer Natalie up. However, she doesn’t want to have a tea party; Betsy wants to watch TV and Natalie has to obey what she says. After Natalie sends Julian spiraling into a philosophical crisis over the concept of reality and whether he himself was real, Polly begins trying to find her daughter’s terms on what would make everything better. A box of kittens? $50? No, Natalie wants to go to Golden Bear with her parents again and even though things will be awkward, they don’t want her to have to go through the school evaluation and agree to have another family trip.

Once at Golden Bear, which coincidentally doesn’t actually have any bears, Polly and Julian do some reminiscing and hit upon the major stumbling block in both their relationship and their co-parenting of Natalie. Their problem is that they don’t talk; he tries to distract himself by whatever means necessary in order to ignore the problem, while she sugarcoats everything and bottle up her true emotions for fear of someone not liking her. They decide to do better for themselves and for their daughter, going back and making sure that she understands about the divorce and that she’s okay with it, which she is. Polly and Julian are just like her and her (real) friend Billy, after all.

And what became of Betsy?

She was left at Golden Bear.

Aunt Flo
Max and Elaine have tickets for a production of Fiddler on the Roof, but they can’t seem to find the tickets anywhere. The more they look, the more upset they both get and the more upset they both get, the tougher it is to find the tickets; luckily, Polly’s home and snatches them from Elaine’s hair, which she put them in while getting ready. They don’t make it to the show, though, as they get a call that Max’s hospitalized Aunt Florence has taken a turn for the worse. Since he doesn’t exactly have fond memories of the overly critical, intentionally mean woman from his childhood, Max doesn’t want to go, but Elaine bribes him with control of the hot tub temperature and successfully gets him to give it a good 10 minutes.

Once they make it to the hospital, they discover that Florence has been drifting in and out and is currently out, meaning that she won’t know that they’re there. However, Elaine’s “C.L.E.A.R.” method of dealing with pain – Confront your feelings, Let go, and Rejoice – and promise of letting Max get angry with Florence makes him stay. They end up missing the show and Max doesn’t even get to talk to a conscious Florence. That doesn’t stop Elaine from looking to rid him of his anger, as she leaves old photos from Max’s childhood and sets up a slideshow on his computer to get him to confront just how much pain Florence caused him. Before he can get back to the hospital, though, they get a call that Florence passed away.

Rather than let her husband fall into a pit of emotional eating and further concentrated anger, Elaine gets him to go to the morgue to say his last goodbyes to his aunt there. They find Florence’s body and surprisingly, it’s Elaine who has a very strong reaction to seeing the woman, alternating between laughing and sobbing. Max gets in some final words to his aunt, forgiving her for who she was when he was a child, and the two leave, having completed Elaine’s method.

Additional Thoughts and Observations:
-“C-L-R spells clear.”
-“There is no justice and life is a cruel, never-ending riddle.”
-“Booger Tom could be our next Picasso.”
-So, hey, you guys. I decided to pick up How to Live with Your Parents because, while it’s not been amazing, I’ve liked it more than I thought I would, especially last week’s episode. It’s got some solid parts and has made me laugh enough where I think that if ABC gives it some time, it could turn into something pretty solid. I’ll likely recap the rest of the season, so stick with me.
-For those who are wondering, ABC is indeed airing these out of order. Tonight’s was the fourth of the 13 episodes, with the other two post-pilot episodes being numbers five and six. The good news is that the next two are seven and eight, so there’ll be at least a little momentum there.
-Never have I liked Polly more than when we found out about her love of cupcakes. My spiritual twin, she is.
-Julian wanted to name Natalie Orange, since nothing insulting rhymes with it and she couldn’t have been made fun of. Of course, any child named after a fruit would likely receive teasing because, I don’t know, they’re named after a fruit. So, yeah.
-Elaine’s pantyhose commercial was cute, especially her Drew-Barrymore-in-Scream wig. And a little thing, but I liked that they didn’t have her be this viral star or anything. TV has gotten stuck on the idea of Youtube and viral videos, to the point where a plot point like that is a drag rather than being in touch with society.
-Who do you think would win in a battle between Distractor and Sugarcoater?
-I know it would have been dumb, but a part of me might have wanted them to play with the idea of Betsy being a ghost, if only to freak out Julian some more.
-Next week on How to Live with Your Parents: Elaine and Max offer to babysit Natalie so that Polly can spend time with Scott. 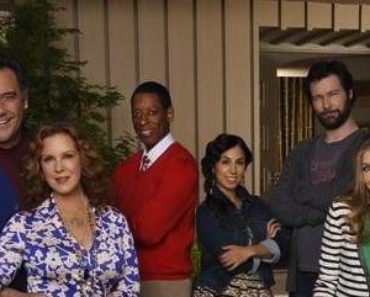 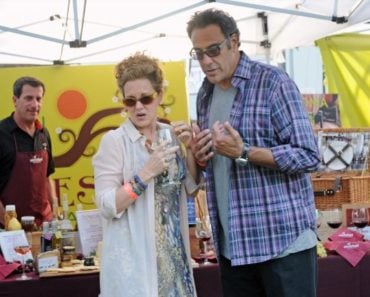 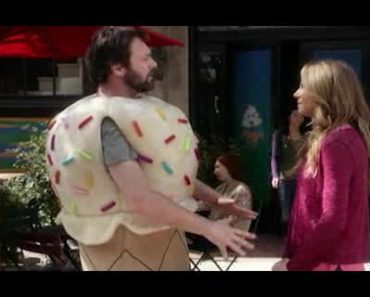 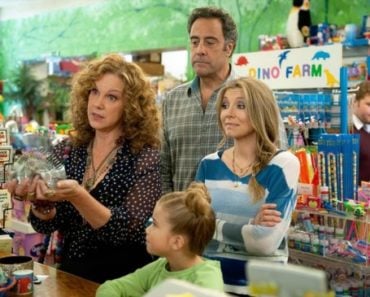