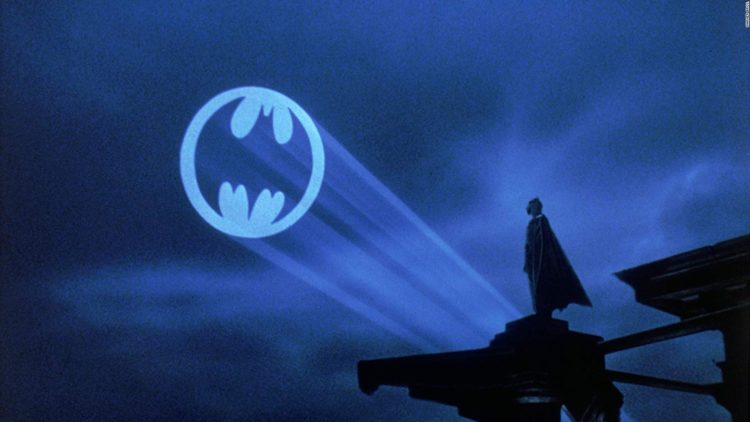 The explanation of how light is projected and how it works with the need to turn things upside down in order to see them projected as one wants it is a bit longer than you might want to read, but thankfully the video below is able to tell you everything you might want to know. But the output that can be seen from the flashlight that is being used is simply amazing since it’s producing 100,000 lumens, meaning that to the layman, this thing is incredibly bright and can get insanely hot, which facilitates the fan that’s built into it. What’s really amazing is that depending on the surface, the light will actually blur out the bat signal. The flashlight that is being used for this video is, quite simply, powerful as all hell and one might think that it wouldn’t be entirely practical. It serves a purpose without a doubt since it can brighten up the night in a very big way, but putting it on the highest setting does make a person wonder why it’s necessary. That’s probably a silly question, but it’s still something to think about since the average person only needs a bright enough light to see in the dark, they don’t need something that can shine bright enough to be noticed by airplane pilots.

Making the bat signal is something that a lot of Batman fans would likely be excited about since it’s one of the more iconic parts of the DC universe and it’s something that a lot of people have attempted over the years. But it does take a little extra to get it right since that perfect image being thrust into the sky does need a little more oomph since otherwise, it’s only going to travel so many feet before the light can’t be seen any further. Plus, with some lights, placing something in front of them, even if it’s something like the bat signal which allows plenty of light to show around it, a lot of flashlights just aren’t powerful enough to project a clear image like the one seen in the video.  There have been plenty of people that have tried different ways to make this happen and from a close distance some have made it work quite well, but for something like this to work one definitely needs a high-powered flashlight, a ventilated container that can house it, the symbol of course, and a lens that will increase the size of the symbol being projected once the light is turned on. Unfortunately, Batman might not come if he can’t see the signal in the sky, but it’s still a cool effect.

The bat signal has changed over the years just as much as the emblem, the suit, and everything else has. One might think that a symbol is a symbol, but the symbol for Batman has changed a number of times since the DC hero came into being, and it’s been changed pretty radically a couple of times until it went back to the form that people remember. The symbol for the hero is fairly important since it allows people to know who he is and in the movies, it’s been kind of a deterrent to crime in a very big way since at one point it was enough to get criminals to stop whatever they were doing and run for cover. But it’s one of the only signals of its kind, which is kind of telling since it would appear that Batman needs to be summoned at times while the other heroes are simply ready to go when they’re called, or when they feel that they’re needed to help out in a situation. There’s something to that, to be honest, but it might not be worth much of a conversation at this moment. What is worth talking about is that it’s fairly easy to make a bat signal of your own, and one that’s this impressive, if you’re willing to sink a few dollars into it for the right materials and know how the process works.

It would be kind of interesting to see who might show up if someone decided to flash this in the sky since depending on where a person lives there might be someone that wants to play along and will show up in costume. Wouldn’t that be a kick? Of course, it might be wise to make certain that it’s not being flashed in a manner that might disorient anyone or prove to be a nuisance, especially if one is using the high-powered flashlight in the clip since that sucker would likely blind a low-flying pilot. But to be certain, it’s pretty impressive since it does have quite the range and when used in the open it does create a nice effect that a lot of people can appreciate.