Home
Entertainment
How to Make Senku Cola From Dr. Stone 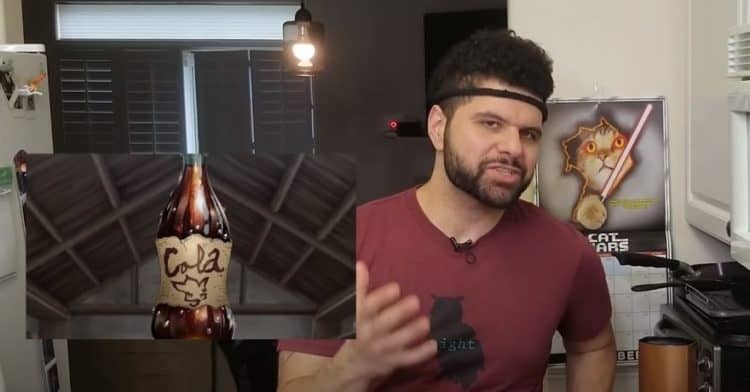 You’ve got to love the fact that this chef threw a shout-out to Babish since it shows that a lot of people online are definitely inspired by each other at some point, but the whole idea of Senku cola might sound gross to start with, even though it could turn out quite nice. It’s amazing really just how things work together when a recipe is used and certain products interact with each other. Some folks might have thought that lime and honey, and cilantro, might have made something interesting, but thinking that when added to carbonated water that it could make a nice soda, well, a lot of us might not see it at first, but it does sound like it’s quite nice. It looks awkward to be certain but considering how the chef was knocking it back near the end it must have tasted just fine since most chefs on YouTube aren’t bound to try and confuse people by stating that something is good when it isn’t. There’s definitely a reason to be appreciative of that since a lot of the recipes that people see online are bound to be tried at one point or another and it’s always nice when we can trust the people that we’re borrowing recipes from. But of course, those that manage to screw up the recipes might need to take a step back and figure out if they added too much of something or not enough before stooping to blaming the chef.

What’s also impressive is how much a person can do in their own kitchen with simple ingredients. A lot of folks will likely think that they need the expensive tools, the premium ingredients, and everything that the chefs are using in order to reproduce these dishes and drinks. The truth is that having the desire to make any of them is the most important while having the necessary ingredients doesn’t mean that you need to break the bank to find just the right stuff. For instance, it does feel that lime juice in the bottle would work just as well as freshly squeezed limes, but that would be leaving out an ingredient that would need to be mulled in order to bring that extra zest to the cola. Also, when it comes to tools, it is usually nice to have the right items that can help to recreate the recipe, but instead of a mortar and pestle, which is popular among some chefs, all you really need is a deep enough bowl and something to mash the cilantro and lime with. Sometimes it takes the simplest of switches when it comes to tools and ingredients, but it’s usually wise to make sure that whatever you select is going to work since substituting anything can change up the recipe in a big way if you’re not careful.

At the end, the cola does look kind of funky since a lot of people are used to seeing cola’s that look dark and have a tinge of color to them, but all in all, it doesn’t look terrible since it does look like it might have a good amount of taste to it and some nice carbonation that would offer another light kick to the senses. It’s not too hard to make such things at home, but if one has never done it then it’s not exactly easy either since it’s bound to take practice to get it right and to make certain that you’re adding in the right amount of ingredients and doing just as you need to in order to release the amount of flavor that’s needed. Cooking the honey is definitely something that needs to be given the utmost attention since honey can in fact burn pretty quickly and not just ruin your pan but force you to keep going until you’re ready to pay attention to what you’re doing. Admit it, a lot of us do tend to think of what else we can be doing while something is on the stove and tend to get scatterbrained from time to time.

Maybe this guy will be one of the next big sensations when it comes to online chefs, and maybe like Babish, he’ll have his own professional kitchen at one point. Or maybe we’ll continue to see him cooking up something new out of his kitchen now and again, it doesn’t matter. He’s been entertaining and friendly enough that it’s very likely that people will take more of a liking to him and continue to follow him, since finding out about different recipes is a favorite pastime of many people and YouTube is actually one of the best places to go at this point, other than the vast library of cookbooks that are out there for anyone and everyone to look at.