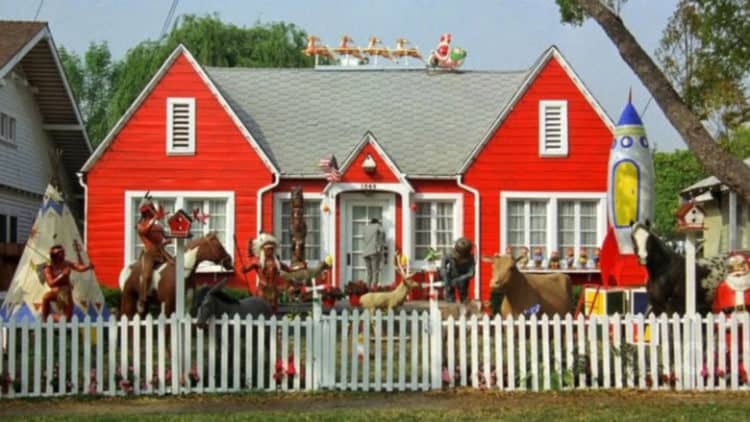 How many people remember when we were kids thinking that we’d love to live in the homes or time periods or universes that we watched on TV? Some of them might not have been what we expected since living in the Star Wars galaxy, in an old western, or in some far-flung fantasy world probably wouldn’t be as comfortable as we would imagine. But what if a person could live in the Pee-Wee Herman house? For $3,200 a month this 3-bedroom, 2-bathroom home could be someone’s home base, but there’s just one catch, the way a lot of us remember it wouldn’t be included since the paint job has been changed and the lawn sculptures haven’t been a part of the scenery since the movie wrapped, and it’s fair to say that if anyone did rent this home they’d have to deal with the same thing that Goonies house and various other movie homes have had to do withstand, the tourists and movie fans that just HAVE to get a picture in front of a home they remember from their childhood. To be fair, it’s all well and good if someone asks, but as some fans have shown in the past with various homes and property, they don’t care about privacy or preserving the scene since they’re bound and determined to get what they want before moving on.

Considering that the home probably looks quite a bit different from the way it appeared in the movie it’s amazing that a fan was able to recognize it, but the design is obviously something that kind of stands out to those that really enjoyed the movie. What’s funny is that Pee-Wee is the kind of neighbor that a lot of people might have tolerated at one point but would have otherwise shaken their head at when it came to his style of decorations. These days it’s likely that a few of his lawn ornaments would get a person in trouble if they were displayed so prominently, but in keeping with the times things have been pretty normalized around the residence, and it’s likely that the interior just as conservative since the toys, the kitchen setup, and even the aquarium just outside one of the bathroom windows are likely all gone. The lucky tenant also won’t get the chance to interact with any of the stars of the movie unless a miracle happens, which means that it’s just the house and the memories that the price of the rent will buy. For a lot of people, that’s probably fine since thinking about the chaos that Pee-Wee lived in is enough to give some people a serious headache from the riot of colors and noises that were bound to come from this home. It was a fun movie without a doubt, but the fact is that Pee-Wee has been, for quite some time, an oddity that has been enough to entertain children but is a character that adults can’t help but laugh at or might think is utterly ridiculous.

I say that with the utmost respect since like many kids I grew up with Pee Wee as well, and laughed uproariously at the movie since it was silly enough to be hilarious and had plenty of moments in which Paul Reubens was able to entertain the masses with little effort. Out of all the ridiculous movies that came out around this time, Pee Wee is one of the few that has managed to stick around and be counted as one of those that people still watch and enjoy in their own way. There is a certain immature feel to the movie that’s hard to get away from and hard to resist since it speaks to our younger selves in a manner that makes it okay to laugh with Pee-Wee and at him on occasion, and to absolutely want to see characters like Frances Buxton get their comeuppance in the end. Likely as not the house wouldn’t really spark a lot of memories in those that didn’t watch the movie or didn’t like it, but it’s still a part of pop culture that a lot of people would jump at the chance to rent since it does sound like a nice home and it could be that whoever gets to rent it might not mind the onlookers that want to see the home that was used for one of the most iconic characters in movie history.

It’s definitely the dream of many to live in a home that’s been used on the set of a Hollywood movie, especially if it’s one that quite a few people know about. The rent is definitely a bit stiff, but considering the location, it’s hardly surprising. Whoever’s looking for a home to rent in the area might want to be quick if they’re thinking about moving in, since it’s likely that this gem won’t last that long.