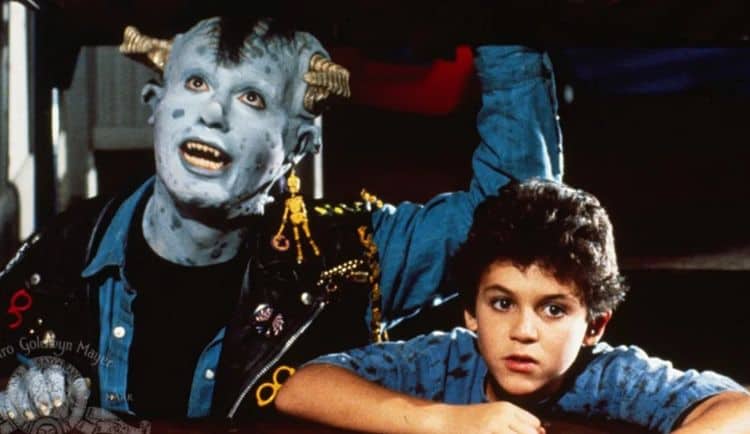 If you’ve never seen Little Monsters it might be time to look it up on Netflix, it’s been showing there recently, and give it a chance. The story is pretty simple and it’s even a bit cheesy even for a kid’s movie, but at the same time it’s great since Howie Mandel and Fred Savage make a dynamic duo that just works for some odd reason. Just in case there are those that haven’t seen it or don’t remember the movie all that much, the whole idea is that the monsters under the bed are real and hail from a dimension all their own where they’re allowed to be as obnoxious and unruly as possible, which is the basic purpose for their existence it would appear. Brian, a new kid in town, is already having troubles fitting in, and it’s made even harder as one morning he wakes to find that he’s being blamed for several oddities that he didn’t cause, such as storing a quart of ice cream in the cupboard and leaving his bike in the driveway. Blaming it on his brother Eric, Brian then runs afoul of a bully that continues to antagonize him at school, prompting a visit to the principal’s office that only makes life worse.

As the occurrences continue to happen he hears his brother claim that he saw a monster emerge from beneath his bed one night. On a bet, Brian decides to try to spend the night in his brother’s room to catch the ‘monster’, but isn’t successful until the second night when finally catches the monster. Upon finding out that the blue-skinned creature, whose name is Maurice, is just out to have fun and is quite friendly, Brian allows himself to be led to the monster world, where he finds that he can do pretty much anything he wants. The only downside is that his repeated trips to the monster world begin to change him in subtle ways that he doesn’t really notice until later on in the movie. There’s a certain secret to the monster universe however, and once Brian begins to find that out, he realizes that the more he continues to visit Maurice’s world, the more he continues to change until the realization hits him that he’s becoming a monster, and that the monsters he’s seen are all former children. As he figures this out however he ceases to go back to the monster world, which in turn spells trouble for Maurice, who was tasked with turning him once it was discovered that he and Brian had formed a kinship of sorts.

Like I said, it was a cheesy movie, but it was still the kind of flick that was a lot of fun as a kid since it painted monsters in a very different light no matter that it kept the idea that those like Maurice were fairly innocent pranksters that liked to have fun. Those that were far nastier however, such as Boy, the ruler of the monster universe, and his thug Snik, were the types that kids are taught to be afraid of when they’re still young. In a big way this hierarchy of harmless to harmful was perfect for this movie since it created every kid’s fantasy, to find a place where the rules don’t exist and you can have fun for as long as you want, albeit with consequences to come later. While some might look at this movie and take a hard pass it’s easy to note that Howie Mandel, who might laugh in a good-natured way if anyone mentioned this role to him, really thrust himself into the role of Maurice since there wasn’t a single moment when he appeared to break character, not even during the heartfelt moments that might have gone against the nature of Maurice’s fun-loving and overall mischievous ways. It would be easy to criticize the child actors in this movie but for all intents and purposes they did a pretty good job as well since despite being kind of awkward in some instances, Little Monsters was still a movie that showed the battle between what was good and what was inherently evil and as such it was the kind of movie that even a kid can enjoy since a lot of us can still admit that there was a certain charge that ran through us when we saw the good guys finally taking down the bad guys.

If you haven’t seen it yet it’s a definite recommendation since despite being kind of cringe-worthy in some spots and outright ridiculous in others it’s still a throwback to the 80s that can remind us that there was a time when some of the cheesiest movies in the history of cinema were our favorites if only for a little while.