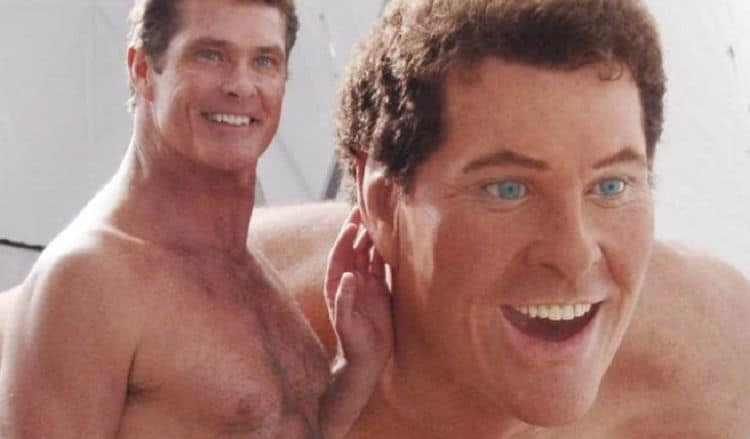 If you have an extra $100,000, first off congratulations for doing so well within the past year, and second, you might want to think about bidding for the David Hasselhoff prop that was created for the Spongebob Squarepants movie, since it’s up for sale along with many other props that the ‘Hoff is selling at auction at in another week or two. If it’s not creepy enough, just imagine a talking sponge and starfish on the prop’s back and you might finally shudder a bit. But along with the other items that Hasselhoff is getting rid of, this massive prop is expected to fetch well over a million since there are a few dozen people that apparently have the money and are currently looking at making some of the things that are going up for bid a part of their own collection. Personally speaking, this thing is flat out creepy and would be enough to use as a Halloween decoration as-is. But some folks are such big fans of the ‘Hoff that they’re bound to put this piece front and center in a room that has space and few other functions than to show off prized pieces of, um, artwork. A lot of folks might be looking at the piece for the novelty of it, but anyone thinking that it’s worth that much might have a couple of screws loose since to be serious, this thing is just disturbing given the realism that was put into it. Even if it looked like a Macy’s Day float it might not be all that welcome in a lot of homes since one can just imagine how big of a scare some people might get walking into a room to see this thing staring at them with its permanent smile and amorous gaze.

It’s always been a bit confusing to wonder why people love Hasselhoff so much, but this feels as though it might be a test of how much people really love him since this kind of a prop isn’t something that can be easily positioned in a home unless there’s plenty of space and someone that lives who you who is really, REALLY understanding. When trying to think of those who might be able to share their love of the ‘Hoff that much it’s kind of difficult since over the years he’s become more of a joke than anything, even with the fans he still has and the admiration that plenty of people have given him. Like a lot of actors, Hasselhoff had his time when it came to fame, and as the years continued to roll by it became kind of obvious that the glamour had worn off and he was more or less a remnant of a time that had come and gone. The fact that he’s still regarded with such esteem by so many is enough to make it clear that he did manage to convince enough people that he’s a worthwhile actor, and the fact that he’s still around and shows up from time to time is evidence enough that he’s been dedicated to the business in some way for a while, but the ridicule he’s endured for so long is still hard to dismiss. This is the guy that helped to make Knight Rider famous, that was instrumental in keeping Baywatch balanced, and has been around long enough to be famous and infamous at the same time. While that’s a distinction that’s shared by many others, the fact that all a person needs to say is ‘the ‘Hoff’ in order to get people to recognize him is kind of impressive.

But this prop is something that’s bound to get as many headshakes as adoring looks, which is disturbing since just imagining it in anyone’s home is enough to give a person the shivers. There are plenty of other items going up for sale during this auction and it’s easy to think that some of them might go quicker than this prop since it feels that they’re not quite as obviously disturbing and wouldn’t be the subject of ridicule to anyone that happens to have them in their home. Seriously, who in the world wouldn’t rather have K.I.T.T., the car from Knight Rider, than this thing? To each their own when it comes to those that would choose to purchase this thing, but yikes all the same. It’s not even accurate to say that there’s a fine line between having a Hasselhoff poster in one’s house and having this thing. That’s a big, fat, glow in the dark line that some folks are bound to cross at their own peril, so to speak. So, to whoever manages to snag this thing and take it home, hopefully there’s a room big enough and out of the way where it can sit and collect dust.