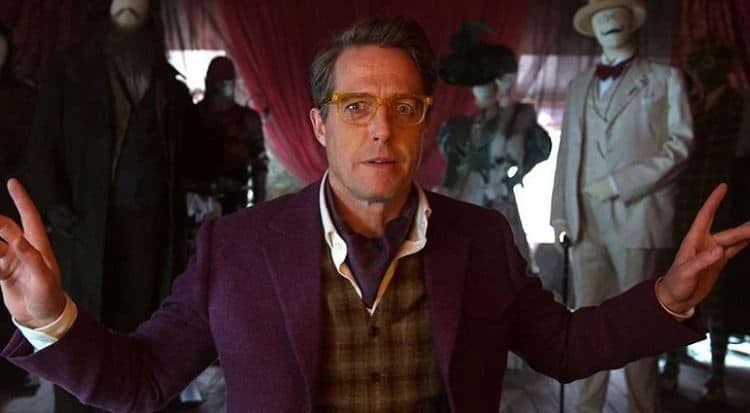 Quite often we get to see Hugh Grant in a comedic or dramatic role, but as he’s been getting older he’s leaned a little more into diabolical and even dark roles it would appear, and the result is getting better and better. One such role that a lot of people might recognize comes in The Undoing on HBO, which is not entirely customary of Grant but definitely gives him a different look. Another might be his role as Fletcher in The Gentlemen, which isn’t a truly villainous role but is close enough given his sneaky and opportunistic manner. It would appear that he’s going to be given another chance of becoming the villain as a Dungeons & Dragons movie that is currently in development will see him as the main villain, someone named Forge Fletcher, if the rumors are to be believed. The movie will also be starring Chris Pine and Sophia Lillis, so it’s fair to say that one can kind of guess at which roles each person might be playing, even if they turn out to be wrong. Given their appearance and stature, Pine might very easily play a fighter or a paladin, which is essentially a fighter crossed with a cleric, and is, as many D&D players would likely agree with, one of the more powerful members of any group. Lillis might play a sorceress, a mage, or perhaps a fighter as well since there’s no way to tell just where anyone is going to be put once they’re added into the mix.

A good D&D group is one that is balanced and carries both offensive and defensive capabilities, meaning there’s a healer, there’s someone that dish out a large amount of damage, and there are those that in-between that can offer support and have their own special qualities. In the game, it usually depends on where a group is located and what type of adventure they’ll be sent on when it comes to whose abilities will be more in demand. In the wilds, it might be a ranger or a druid, in a dungeon a rogue might be the best person to have to check for traps and hidden areas. The fun part about the game is that if the Dungeon Master is adept at what they’re doing and knows how to follow a quest book or make up their own quest, the group will find that the challenges will make them think and possibly discover new ways of doing things that will enhance the experience in a big way. The only issue with a movie based on D&D is that it’s been tried before and had a less than stellar outing since anyone could ask Jeremy Irons how it went with being the villain of such an adventure. One could say that there are a lot of factors that go into a D&D movie, and this might be the issue. But the truth is that while this point is well taken, there are plenty of adventures that can be adhered to that are well-developed and don’t require quite as much work to put together. Plus, given that many people don’t play this game it’s not something that they might be able to predict, and even the most devoted of fans might not be able to see what’s coming.

Seeing Grant turn to a darker role is interesting, but when it comes to this particular project it feels as though there will still be enough comedy within the movie that he’ll be allowed to play it up a bit and be the type of bad guy that won’t be nearly as dark as some, but will happily destroy people left and right as he pleases. It’s hard to say really without knowing that much about the movie yet, especially since there’s so much that can happen in D&D. Plus, and this won’t make a lot of sense to those that have never played the game, it kind of depends on what edition the movie will be based on, or if it will pull from all of them here and there, which would be insanely confusing for the writers and definitely troubling when it comes to keeping a cohesive storyline. If you’re wondering what I mean by ‘edition’, it’s alluding to the fact that Dungeons & Dragons has several editions, and the 5th is the most current. The difference between the editions are the classes, such as fighter, cleric, barbarian, etc., and even race, meaning dwarf, halfling, human, etc. Between editions there are also rule changes that manage to alter the game just a bit, but if this affects how the movie is made it will be a little surprising. When all is said and done though one just has to trust that the writers will give the fans something great this time instead of the utter flops that have come before.