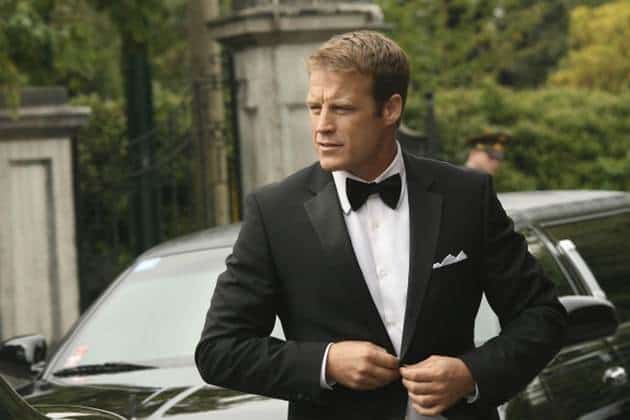 Human Target‘s third episode was a clear step down from last week’s stellar “Rewind.” While it was quite different from the previous episodes in that it didn’t take place on a near-inescapable fast-moving vehicle, it was the most inconsistent of the three episodes, and was on the edge of being incoherent.

The episode began in a fresh new way: a chase scene that didn’t involve main character Christopher Chance. While the one doing the chasing is usually the bad guy, in this case, it was a good guy, Danny Cooper, who collapsed and died while in pursuit. In his final moments, he called his brother and gave him Christopher Chance’s phone number.

His brother Aaron, a clueless journalist, was approached by Chance, who explained to him that his brother was a man who hunted spies. The brother doesn’t question this statement from Chance, or even express slight skepticism. Either he’s not a very good journalist, or the scriptwriters got a little lazy.

After finding out that Danny was planning to take down a spy at the Russian embassy, Chance goes in to take his revenge at any cost. There’s a neat little scene where Chance reveals that the Secretary of Defense “owes him one,” but this is where the episode takes a sharp left turn into confusion.

The episode tried to cram in too much in its forty-five minutes, and a lot was apparently shortened. It was the plot was followable, but only just. Apparently, the man that Danny was chasing was some sort of spy who was auctioning off secret blueprints to the guest list of the party at the Russian Embassy, and he’s doing it via bluetooth. And there’s some kind of poison involved, which killed Danny and almost killed Chance and Aaron, but they were given antidotes just in time. And after that, nobody seemed to worry too much about the deadly airborne toxin.

The main baddie for the episode was killed pretty anti-climactically, and I was left wondering what exactly he was all about. It was a poorly handled plot twist, and it made me wonder what exactly the point was.

One good part of the episode was Emma Barnes, the female FBI agent who Chance fought against, and later grew an attraction to. The funniest moment of the episode came when Chance mistook Emma for a prostitute, and paid her forty dollars, which she took as an insult, claiming she would be worth much more than that.

McBride and Haley were solid as always, but didn’t really stand out in the episode. In fact, nothing much stood out, save for the plot stumbles and incoherence. There were a few saving graces throughout the episode, but Target‘s going to need more than that if the episodes continue to be of this quality. Hopefully, next week’s “Sanctuary,” will give Chance and Co. a much needed “Rewind.” C