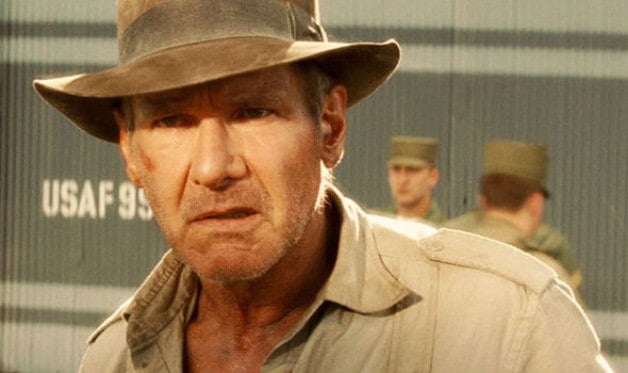 I must say, I never thought we’d be getting another Indiana Jones movie after Kingdom of the Crystal Skull. I’ll be honest, I found some enjoyment in the movie, but yeah… those aliens really killed it. Oh wait, they weren’t really aliens, weren’t they? I guess they were more like “extraterrestrial beings”, but honestly, does it really matter? Absolutely not. Kingdom of the Crystal Skull derailed the franchise and ended a great action series on a sour note. Aside from the whole not-aliens mumbo jumbo, Indy’s story ended with him settling down and marrying Marion Ravenwood. Oh, and he found out that Shia LaBeouf’s character, Mutt Williams, was actually his son. It was kind of implied that he was going to continue Indy’s legacy, but that never happened. But hey, at least the man got his happy ending.

With the famous treasure hunter finally settling down, it seemed the adventures of Indiana Jones came to an end. After 2008, there were a lot of talks of continuing the series, but it was just one of those things that we had to sit on for a while. It wasn’t long before it got to the point where we all gave up hope, but you know what? It appears fortune favors the patient. Okay, maybe it’s too soon to talk positive yet, but we are indeed getting a fifth Indiana Jones movie.

I’ll admit, I’m super excited for this movie. I still remember seeing the first Indiana Jones movie for the first time and it stuck with me ever since. I think many movie fans will agree with me when I say that Raiders of the Lost Ark is one of the best movies ever. If you don’t agree, well, then shame on you. Just kidding (kind of), but if you haven’t checked it out, you’re seriously missing out. Indiana Jones and the Raiders of the Lost Ark changed the game for action movies and helped catapult Harrison Ford into stardom. Heck, it even inspired the creation of the very awesome Uncharted games.

Call it overdue or unnecessary, but I think now is a great time for another Indiana Jones movie. And can we just give Harrison Ford truck loads of credit for still wanting to take up the hat and whip at his age? I mean, the man is almost eighty-years-old and still wants to be Indy! Can we expect Indiana Jones at that age to be brawling with younger, stronger bad guys? Well, this is a series that involves magic and aliens, so I’d say probably. Just think of it this way: Indiana Jones can finally end on a good note. For all I know, the movie can be worse than Kingdom of the Crystal Skull, but I don’t think that’s possible. I mean, it’s got James Mangold in the director’s chair for goodness sakes! That’s enough to get me excited.

However, because of Kingdom of the Crystal Skull, there is something about this sequel that bothers me. If this is truly going to be Indy’s last adventure, he might retire for good and have someone carry on the Indiana Jones name. Will Mutt Williams be that person? That is his son, after all, but last I checked, Shia LaBeouf wasn’t approached for the fifth movie. Maybe it’s because James Mangold sees no use for him, or maybe it’s because of the controversy about Shia LaBeouf that has come out about him lately. Either way, I just can’t help but wonder if James Mangold intends to even mention Mutt Williams in Indiana Jones 5.

Now I know the reception for Mutt Williams wasn’t exactly positive. However, the character had a big impact on the Indiana Jones timeline. Indy found out he was his son and even before he found out, Mutt acted as his companion throughout the movie. Basically, he became the new Short Round. And yes, he’s the son of Marion Ravenwood as well. However Indy comes out of retirement, it’s going to be a bit strange if he goes through his whole adventure without mentioning his wife or his son. Unless James Mangold goes the easy route and just reveals that Indy and Marion divorced at some point. But even so, wouldn’t it make sense to at least mention Mutt’s name at least once?

Well, since I mentioned Short Round earlier, does anyone else ever wonder why Indy never mentioned him in the sequels? Short Round was his child sidekick and basically his surrogate son, and yet we never heard from him again after Temple of Doom. In fact, I wouldn’t mind seeing an adult Short Round in the next Indiana Jones. I think we’d probably enjoy seeing him again more than Mutt. But regardless, if Indy didn’t mention Short Round after we first saw him, I don’t expect him to bring up Mutt. Maybe Mutt actually went off to college at his father’s behest, or maybe he’s off doing his own adventure. The thing is, Indy probably doesn’t need him to be his companion again, so my guess is, there will be no mention of Mutt Williams.

Personally, I’m a bit disappointed that he probably won’t be appearing again. Say what you want about Shia LaBeouf, but he gave a good performance as Mutt. Boy, I really miss when he was normal. The reality is, the majority of Indiana Jones fans just didn’t dig Mutt Williams. He may be the son of Indy, but his character isn’t essential for Indy to have another big adventure. We just want to see Indy do his thing, without CGI animals or aliens. There really is no use for Mutt or even the need to carry on Indy’s legacy. Why? Well, because there is no Indiana Jones without Harrison Ford. If there’s no Harrison Ford, then you can no longer have any adventures. After this fifth movie, we’ll get the video game and probably some comics or novels, but we deserve one last adventure with Harrison Ford as Indy.

Heck, maybe James Mangold will introduce another long-lost kid of Indy so we can forget about Kingdom of the Crystal Skull completely? Okay, maybe not, but I’ll believe it when I see it.