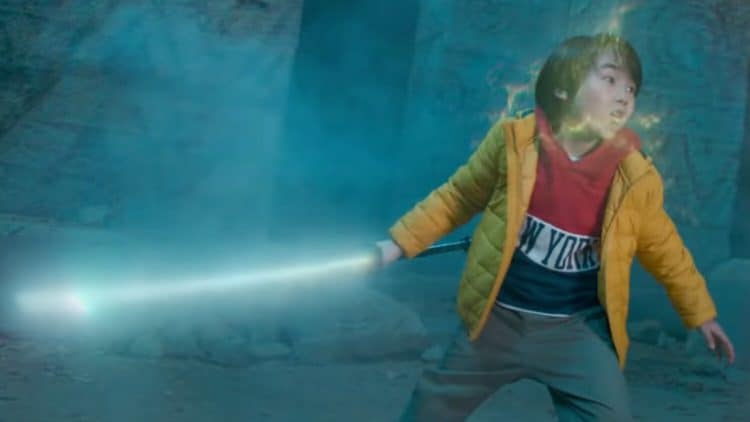 It kind of has to be said that foreign movies sometimes look wild and crazy to those of us that don’t watch them all the time, but they look crazy in one of the best ways since it’s almost like an Asian Dungeons & Dragons movie featuring a young kid as the main protagonist and a bunch of people in makeup and CGI effects galore coming together for an epic known as The Great Yokai War: Guardians. Just in case you were a little behind on the language you might want to look up ‘yokai’ on Google to find out that in Japanese folklore, the yokai are a class of supernatural monsters and spirits that take on a number of different forms as the trailer shows. One thing about folklore though is that it’s very likely that what we see on the screen might not be one hundred percent indicative of what the actual folklore is all about and even looks like. Those that realize this are likely aware of the idea that folklore is more versatile than some might think and interpretations of various characters and creatures are bound to change now and again.

But the main idea is that a 5th-grade student, Kei Watanabe, has inherited the hunter’s blood that allows him to hunt yokai, which means that he’s off to start a war with the yokai and will undoubtedly become kind of OP as the story goes on. Instilling kids as the main protagonist isn’t anything new, and giving them power and the ability to use it isn’t a revelation either, but taking a look at the trailer makes it apparent that Kei might be extremely powerful, but he’s still a kid. The realism this gives the story, which looks absolutely nuts but also kind of cool, is important since despite this being a fantasy story there is that need to remind everyone that this is a kid, and while kids are stronger and more capable than a lot of people think, they’re still kept in check by their own inexperience and physical limitations. While the latter can be augmented obviously within a story, the former is what trips a lot of characters up.

It’s a lot of fun to see kids involved in fantasy movies since they end up getting to live the experience and inspire other kids that might watch the movie to do something or think up something great in their own time. But the fact is that kids still need to be kids since unless they become adults through some strange turn of events, like Shazam, then kids in a fantasy movie are usually going to be woefully outmatched and outclassed. That is unless the story calls for them to suddenly be great fighters and wise tacticians which is still a rarity in this day and age but something that some folks might want to see simply because it would be cool. One thing that does happen in a movie like this quite a bit is that the more brutal violence will be turned down in a big way so as to allow it to be viewed by a younger crowd and families.

If the violence became too great the rating would have to change and the intended audience would be much older. It’s kind of hard to tell from the trailer, but it does appear to be something that might cater to kids and families as well as adolescents, given the appearance of it. In reality it kind of looks like an epic fantasy mixed with a video game, which could probably draw a lot of curious onlookers that might want to see what it’s all about. One thing is clear though, and that’s the fact that the style of storytelling in Japan is a bit different than it is in America since the legends and their appearance are quite odd-looking at times but definitely interesting enough to get into since it brings a very whimsical and colorful appearance to the movie that people might be wise to pay attention to. It’s easy to think that this movie would be able to snag the attention of many individuals based on the looks of it alone.

Stories told in Japan and stories told in America are very different in appearance sometimes but the main thrust of any story is to get someone to pay attention to it in whatever way possible. This story definitely has that quality and from a look at the trailer it appears to have action, comedy, drama, and plenty of visuals that people will enjoy, not to mention a premise that a lot of kids would think is pretty cool. So yeah, it looks crazy, it looks out of control, and it definitely looks like something that could be a lot of fun.