Home
TV News
Is a Wolverine Anthology Series Coming to Disney Plus? 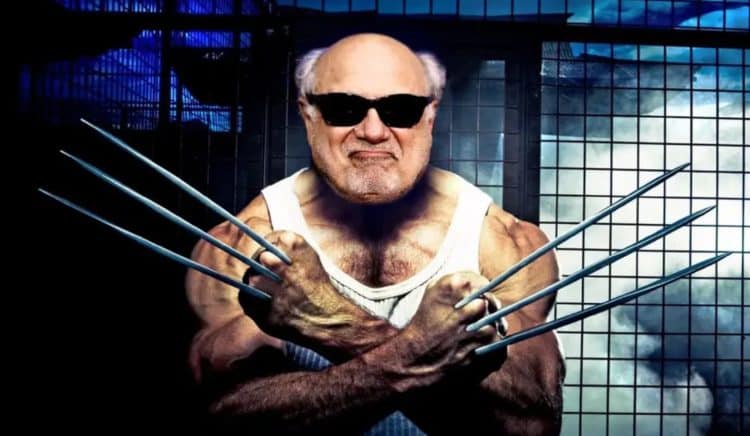 Despite the humor in the picture above, Danny DeVito is actually closer to Wolverine’s actual height than Hugh Jackman was, but don’t fret too much, seeing DeVito as the Canadian mutant isn’t about to happen as far as anyone knows. But there are rumors circulating that we’ll be seeing the famed hero gracing Disney+ eventually with his own anthology series, which isn’t hard to see happening since Wolverine’s past has been chopped up and put back together so haphazardly over the years that even the most definitive tales feel incomplete and not entirely sincere. From teh time he was a boy to the moment he became Weapon X, Logan, or Jim Howlett, whoever he is, has had a rough time of it since his mutation emerged at one of the worst times in his life, and since that time he’s been alone mostly until he found a place with various teams that took him in. The X-Men was the team that many people came to associate him with, and to be fair, when he first appeared in The Incredible Hulk, a lot of people didn’t even know he was a mutant. His claws were an essential part of his uniform apparently, or so the rumor goes, but as the character gained traction in the Marvel universe his life took on new dimensions and it became obvious he was meant for something else that would eventually lead to who he became.

Wolverine has been a favorite hero in the Marvel universe for a long time for a number of reasons, one of which is that he’s not the typical hero, meaning that his catchphrase, “I’m the best I am at what I do, and what I do isn’t nice” is more than just a cool saying. He’s been one of the most violent heroes in the history of the Marvel universe, but as the years went on he started to curb his more violent ways, becoming a hero rather than a full-time berserker. But there have been many times when Wolverine has popped his claws with full the full intention of using them. He’s gone up against some of the toughest opponents, done some of the worst things, and has been more misunderstood than many of the X-Men, largely because he tends to keep his own counsel most often. When it comes to a lot of heroes it’s understood that a lot of them have had hard lives in one way or another, but few of them have been mind-wiped or tortured as Wolverine has, and the only reason he’s been able to survive in the comics is due to his insanely effective healing factor, which has allowed him to grow back organs, flesh, muscle, and has kept him from dying on several occasions. An anthology would be best simply to explain this character a little better, hopefully in a way that hasn’t been done yet, or that keeps in line with the comics in some way, since as it’s been seen in the Jackman-era there are plenty of reasons why he was great for the role, but there are still plenty of differences that came about that people simply let go.

Another upside of bringing Wolverine to Disney+ instead of sticking him in another movie is that his story is one of the longest of the X-Men, if not THE longest, and could span at least a season or two before even thinking of bringing in the rest of the team. So far it would appear that The Mutants is the working title that will bring the X-Men into the MCU, but there’s not much known about it other than that right now. But bringing Wolverine in first would likely appease a lot of people since despite the popularity of the mutants in the Marvel universe, Wolverine has been one of the absolute go-to mutants for decades since his first appearance, as he was one of those that helped to rescue the original X-Men when he was brought in as part of the second team. It’s fair to say that he didn’t start out being a team player and there were plenty of times when he wasn’t much a teammate, but having Wolverine as an ally has usually been better than having him for an enemy, since when he’s not in berserker-mode he’s bound to be one of the deadliest fighters around given how long he’s lived and how many fighting styles he’s learned in that amount of time. Bringing him to the MCU first would be great since it would be a good place to start when it comes to building up the mutant presence before tossing them all in the mix. How they would bring him in and who would be cast are still big questions that need to be answered though. It will happen, in time.