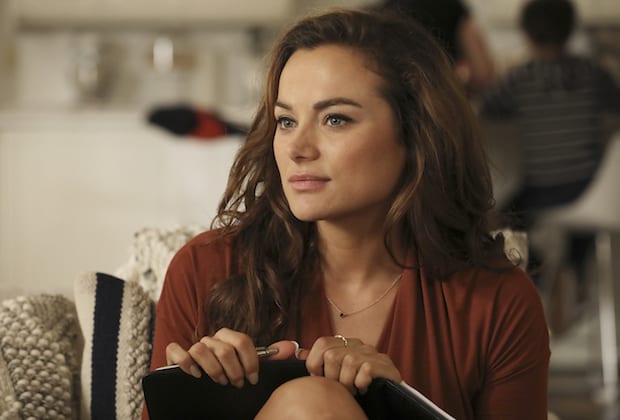 Recently Christina Ochoa’s character Ashley on A Million Little Things was seen making a rather touching goodbye call to Gary before boarding a plane to Spain. Sometime earlier in the episode it had been explained that she had admitted to Delilah & Co. that Jon had taken out a life insurance policy that no one knew about. This kind of made a lot of people feel that Ashley would be leaving the show altogether, but it seems that isn’t the case at all. While Ochoa has confirmed that she won’t be in the rest of the season there’s nothing to say that she won’t be coming back at all since the show isn’t done with her character yet and there’s plenty left to go on.

It is kind of amusing how people jump to such startling conclusions when their favorite character, or at least someone they see as a permanent fixture, up and disappears for a while. This tends to make a lot of people think that an imminent change is coming to the show they like and that nothing is going to be the same moving forward. It’s not certain just where she’s going to end up at the moment, but chances are that Christina has another project on the way or something that has taken up her time and will be keeping her from fulfilling any obligation to the show for some time to come. Or it could be that the character of Ashley has hit a point in her development where she’s not needed as much and can fade off into the background for the time being until it’s time to bring her back. There are dozens of reasons why characters leave and aren’t seen again for a while, but many fans, believe it or not, will seem to forget them all the same until there’s even a hint of a rumor that they might be on their way back.

Anyone remember what it was like before social media to think that you’d lost your favorite actor or show only to see them come back unexpectedly once again? The insane amount of buzz this created in the fan base was something to behold back in the day since from an entertainment standpoint it was big news and needed to be discussed. These days it’s not much less when people leave and come back, but in all honesty it’s not the same since social media and the constant leaks that come from film and TV sets tends to spoil a lot considering that people will have the news of a return in hand well before the actor or show ever comes back. In fact when Ochoa does make a return to the show it’s likely that the news concerning it will have been building for a month or two at the very least, just enough time to get fans stoked and prepare for her arrival without letting them sit so long that they get bored with waiting.

Whatever she’s doing at the moment there’s no doubt that Ochoa will be waiting to come back since she’s made quite a career for herself and this show has been a very positive part of it. The idea that she would ever just up and leave is something that sounds ridiculous enough to be laughable since no matter if a person likes the show they’re on the chance to become known, loved, and looked up to while getting paid is something that many people in their right mind would never pass on. So if you’re wondering and worrying over whether Christina might never come back then you rest easy and think that eventually she will come back.

The chances that you’ll find her return on social media eventually are pretty good since it doesn’t seem to be that a lot of people miss when something is posted to social media whether it’s a rumor or the truth. A Million Little Things is a popular show at this time so it’s fair to say that anything and everything that has to do with it has been given a dozen different articles from a dozen different viewpoints by now. We’re currently living in an era where people have figured out that they can get others to listen to their two cents if they go online no matter if they have something useful to say about a show or simply offer their opinion. To be fair a lot of people do bring a very wide array of opinions to the table that make sense and, in some cases, are so outlandish that they might not make sense but they tend to open up new avenues of thought. In relation to the show however you can be assured that someone will tag the return of Christine Ochoa before it actually happens.