Home
Movies
Is It Possible We’ll See a Sequel to Napoleon Dynamite? 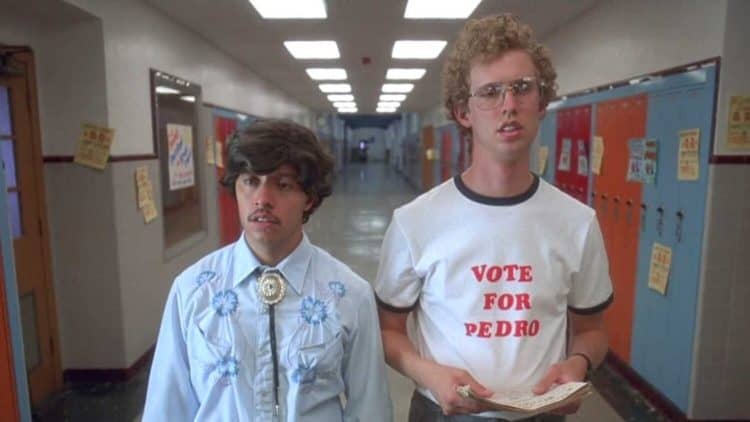 Years after watching Napoleon Dynamite I’m still trying to find the humor in it, and having to tell myself that it’s funny to a lot of people so it can’t possibly be as boring as it looks. But that saying ‘to each their own’ feels important at this moment since the Napoleon fans out there are fully ready to see another movie and to swatch Jon Heder take on another aspect of life that might be just as lackadaisical as the first movie. A lot of people want to say there’s depth to this movie and at this point, it’s not worth it to argue against that since the world of the average high school student can be as vapid as it looks or it can have several layers to peel back in order to really get to the heart of who a person is. At this point in time if a sequel were to be made it would obviously showcase the individual characters in a much different way than the first movie since otherwise, it might as well be the same thing years later but with the main characters older and just as pathetic. This time around however it could go dark as some folks are thinking and show Napoleon navigating the idea of being an adult as the rest of the cast have to adjust to different parts of their lives as well.

Seeing as how the original was enough for many fans to get into and continue to talk about for years after its release, the sequel would no doubt have a lot of people willing to put on their masks and head to the theater just to see what might happen. Would Napoleon and Pedro grow up still being good friends? Kip and Lawfawnduh be happily married and have kids or would she have dumped him and moved on? There are just so many questions to consider and directions that Napoleon and the others could go in that it’s hard to think of them all at once, but it’s likely that fans are already coming up with enough theories to fill several articles since whether a person likes the movie or not it did manage to cause quite the stir in pop culture and gain the backing of many upon many people that genuinely enjoyed the movie and wanted to know everything about it. There are even videos online showing other footage that’s related to the movie though to be fair, they led up to the idea of the movie even if they weren’t shown.

Something about this movie appeals to some people and simply confuses others as to its popularity since it does manage to depict high school life in some way, but not in a definitive voice, which can be said of many high school movies since very few, if any, have managed to get it right without becoming a parody or satire of the years we spend between the end of junior high and the real world. Even saying such a thing would likely be argumentative to some people since a lot of kids tend to deal with the real world while they’re in high school as either a means of survival or just because they have no other choice.  This movie showed a side of high school that’s real enough and that is painfully boring in some areas but obviously entertaining in others since the reaction of the fans is enough to make that a bit obvious. It’s easy to think that a lot of fans would be on board to see a sequel, but it’s a bit difficult to say how many would really like to see Napoleon as a grown-up since it almost feels like we’d be seeing him act pretty much the same despite being years older. After all, it worked for Bill and Ted, right? To hear that the sequel might go darker or at least be more serious still doesn’t make it sound as though it might be that bad since to be fair the first movie is definitely an acquired taste for a lot of people and some folks still can’t understand why it was considered to be so great. Is it the irony in the movie?

Whatever it was, Heder is definitely up for another movie if it ever happens, but it’d be interesting to see if the entire cast was up for it since it might take all of them to make another one work in the same manner. Fans would still be there no doubt, but the idea of movies being made so long after their original has become, well, less than original at this time and if it did happen there might be a few changes that people would have to adjust to.