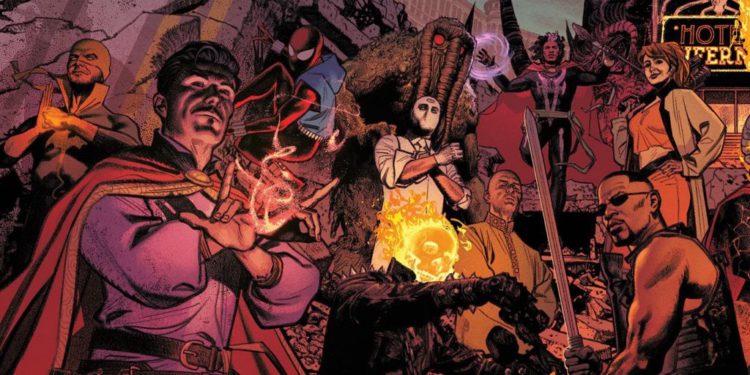 After the outcome of Avengers: Endgame, Marvel fans can guess what direction they intend to go in next. We lost some significant heroes, but gained some new ones. This marks the beginning of a great chapter for the Marvel Cinematic Universe. Let’s take a minute and go over what we already know is coming.

For one, we know which Marvel teams will be joining the MCU. The team that resembles the elephant in the room is without a doubt, the first family of Marvel Comics, the Fantastic Four. This is a team that we comic fans have been waiting to join the MCU for a while now. Come on, they deserve it, considering they haven’t had the best luck with their live-action movies. I’m happy we’ll be getting a (hopefully) memorable Fantastic Four movie, but we know that Disney and Marvel won’t stop with them.

Any ideas on what other Marvel teams could make their MCU debut? Yeah, yeah, I know what everyone is thinking and yes, I very desperately want the X-Men to join the MCU. Who doesn’t? The thing is, those teams are neck and neck with the Avengers as the top superhero teams in Marvel Comics. While I’m sure we all want to see these teams join the MCU, I believe Marvel should take the opportunity to add in some less popular teams.

I have some ideas, especially now that the MCU is expanding its ranks. They’re already setting up the foundations for certain teams, including the Young Avengers and the Thunderbolts. Oh, and hopefully we’ll get a new and proper incarnation of the Defenders, perhaps one that is more loyal to the comics. For the record if that happens, it means Doctor Strange and the Hulk will be a part of two teams in the MCU. That is, however, assuming the Defenders from the Netflix shows don’t get the band back together. Somehow, I don’t think too many fans will miss that, but we’ll take Charlie Cox’s Daredevil and Kristen Ritter’s Jessica Jones.

I’m emphasizing on more MCU teams, because I believe it would be cool to see some unexpected and overlooked groups of unlikely heroes. How about going way into the deep end and dishing out some antiheroes who look a lot like villains? Well, Marvel apparently has one particular team in mind that would be fitting, considering the characters they’re introducing soon.

According to some sites, such as That Hashtag Show, Marvel might be bringing in the freakiest team they have. Ever wonder what a team of the most supernatural superheroes in Marvel Comics would be like? Well, that team does exist, and they are called the Midnight Sons. Doesn’t exactly sound like the rejects from a Saturday morning cartoon, right? If you can think of some of the top supernatural superheroes in Marvel Comics, then those are the kinds of guys that make up the Midnight Sons.

Let’s start with a certain vampiric hero that we know will be getting his own MCU movie soon. Mahershala Ali will be playing Eric Brooks, or the famous halfbreed vampire hunter known as Blade. When it comes to the supernatural, Blade is at the top of that caliber. He’s also a prominent member of the Midnight Sons, along with several other supernatural Marvel heroes.

Let’s talk about another Marvel hero who is probably the king of the supernatural. This guy already had his own solo movie, but that was before the glory days of the MCU. In fact, he’s had two solo movies, and another version of him has appeared in a show set in the MCU. I don’t know about you, but I’m eagerly awaiting for Ghost Rider to make his MCU debut. First of all, no Nicolas Cage. His transformation scene was hilarious, but his take on the character should be left in the past.

Speaking of Ghost Rider, we already know that multiple Ghost Rider’s exist in the MCU. For instance, we’ve seen the Robbie Reyes version in Agents of Shield, along with the Johnny Blaze version as a brief cameo. It wasn’t bad, but with Agents of Shield ending, I have a feeling Ghost Rider will be rebooted for the MCU. In fact, there’s a rumor floating around the internet claiming that Ghost Rider will be appear in the upcoming Doctor Strange sequel. If these rumors are true, then I wouldn’t be surprised. The next Doctor Strange movie will apparently have horror-like elements to it, and will emphasize on the Multiverse. Ghost Rider looks like he comes right out of a horror movie and if Doctor Strange gets caught in some hellish dimension, then he very well could meet Ghost Rider.

I can see the Ghost Rider rumors being true, and if they are, then Marvel could be setting up for a Midnight Sons movie. Another cool fact about the Midnight Sons is that their lineup isn’t limited to just the supernatural heroes. One other underrated Marvel hero who is on the team is Moon Knight, the Batman of Marvel Comics. This character will be getting his own Disney+ show, so if Midnight Sons is coming, then we know he’s going to join them. Nothing wrong with adding a little humanity into the mix.

Now the characters I just mentioned would be a cool lineup, but they can add other characters. The characters I have in mind are Marvel characters who the average comic fan might not be familiar with. They can add in Elsa Bloodstone, Hannibal King, Werewolf by Night, or Hellstrom. Heck, they can even bring in Morbius, a popular supernatural anti-hero character. He’s getting his own movie soon and is being played by Jared Leto, so I can imagine Marvel using him in bigger things.

Oh, and you know who else joined the team? Another vigilante Marvel hero known as the Punisher. Yes, this team has no shortage of violent anti-heroes. This is the kind of team that we wouldn’t expect from Marvel, but I think they can make it work. Exploring the more supernatural side of the MCU would be a different and very cool perspective to see. Go for it, Marvel.