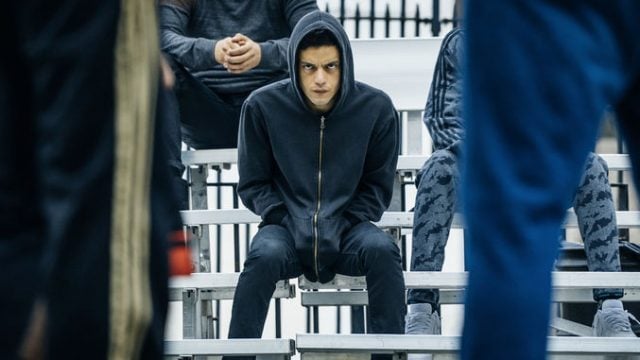 With last week’s “eps2.5h4ndshake.sme,”Â Mr. RobotÂ finally gotÂ to the story it really wants to tell this season – but what story is that, exactly? While fsociety sits behind a computer, snickering at the larger movement’s latest attempt to replicate the immature sensibilities of the revolution Elliot started, Angela’s running rampant through Evil Corp and Elliot is finally coming clean to the audienceÂ about what he’s actually been up to:Â only one of these stories really has any kind of forward movement, and it’s arguably from the character most emotionally detached from the heart of the series (I’m talking about Angela’s Baller Ass Power Trip, seen in full effect this episode). The rest ofÂ “eps2.5h4ndshake.sme”? It’s kind of a hot mess, slowly winding its way towards its Big Reveal in the final five minutes, with all the pace and grace of a drunk grandmother at the end of a three-mile run: by the time it gets to the Baz Luhrmann-esque spinning shots at the end of the hour,Â Mr. Robot‘s reality is left in tatters, and what consisted of a narrative this season to this point along with it.

The problem of last week’s climatic reveal is not the reveal itself, that Elliot has been in prison for the whole season: it’s how that reveal acts as a microcosm of the season’s issues to this point.Â Mr. Robot, so content to play coy with its audience, has completely shifted the perspective in question: instead of Elliot always trying to figure out what’s there and what isn’t,Â we’reÂ always trying to figure out what is really going on. This completely changes the dramatic tambor, in a way that feels very familiar to what happened in later seasons ofÂ LOST: consumed by the easter egg hunt to discern what is real and what isn’t (right down to the many reveals across both seasons of what physical abuse Elliot does and doesn’t put himself through),Â Mr. RobotÂ has become more facetious withÂ its storytelling, ultimately only to disguise a series of conventional plot twists and character developments.

Elliot’s reveal eight *long* hours intoÂ Mr. Robot‘s Kubrick-loving second season basically resets the clock narratively (forget the logical issues it creates, like how the whole hacking Ray thing actually went down): only now that we actually know what we’re seeing can we move forward. Whiterose protecting Elliot in prison brings a (very small) bit of clarity to what’s going on with Elliot, and his impending return to actual reality means there will be some movement on the fsociety front. What happened in those first eight hours, however, is essentially useless: characters like Ray and Leon will be forever lost in that illusion, their arcs rendered pointless, even as they took up critical screen time that left the rest of the show on the narrative hamster wheel (like Dominique DiPierro, a terrific performance hamstrung by her relative lack of importance to the central conflicts of the show).

It renders the secondary stories completely and utterly pointless, at least until now: fsociety is an interesting idea in theory, but the execution of the show’s digital revolutionaries has been an abject failure this season – and this includes the group hacking the motherf*cking FBI, something far beyond their ability to wipe out the servers of Evil Corp. Instead, we’ve seen an ineffective, unreliableÂ organization that resorts to cheap pissing contests with corporations, operating with self-righteous immaturity in every activity. There’s no sense of purpose to the hacks of season two: Darlene is just covering her ass, treading water for Elliot – her actions, while purported to be significant, haven’t actually affected the show’s core stories in any tangible way, shape, or form. Even her influence on Angela acts more as a primer for Angela’s character, than definitive, meaningful action for Darlene: that dichotomy can be felt anytime we’re in the real world, where Angela and Darlene have replaced Elliot as the de-facto protagonists of the story.

While Angela’s arc offers new hope for a character sidelined late in season one, it feels lost on another show at times, mostly when it exists in conjunction or contrast with Elliot’s sister. Darlene’s “leadership” while Elliot’s in prison has not been effective or convincing, rendering much of season one’s character work pointless as she becomes more dead-eyed and one-dimensional. The vacuum Mr. Robot left in his own organization is one of the season’s biggest flaws: Darlene, exposed as a woman willing to be complicit in her brother’s mental breakdown to accomplish her dream of anarchy, hasn’t been able to rebuild any empathy for her in season two. She’s willing to do whatever it takes to put the season 2 MVP Angela in harm’s way, all so she can hack the FBI with a wireless network titled “Wank”: the these are not the acts of a revolutionary working for the people, which exposes her as phony, where Angela’s grasp to steal power from Evil Corp and choke them with it provides this season with a much-needed emotional undercurrent.

And the other stories ofÂ Mr. Robot‘s second season? Save for the endlessly compelling Grace Gummer performance as the show’s obligatory investigative element, the stories surrounding Elliot’s descent into insanity have been wildly unsatisfying. A hypnotizing conversation between Dom and a masculinized Whiterose aside (ok, Dom and Alexa is good, too), the other big focal point of the season is anchored to nothing else on the show. Again, asÂ Mr. RobotÂ plays more and more coy with the truth, characters like Joanna (already weightless entities on the show) struggle to provide any sort of meaning or presence. Joanna likes to get choked out by a younger dude? This is not character development, in any way shape or form – and until they get to the point with What’s Going on With the Wellicks, her story is going to be left wandering in the dramatic ether, another thread ofÂ Mr. RobotÂ thatÂ is frayingÂ into nothingness as season two refuses to push itself forward.

The more season two buried itself in Elliot’s warped mind (and felt clever about it), the less satisfying a show it became: while it was certainly visually evocative, the deeper understanding of human nature and the satisfying (if superficial and flashy) Occupy Wall Street perspective from season one was missing, along with the familial dramas that gave the freshman season a bit of broader emotional depth this season has lacked.Â Mr. RobotÂ wants us to accept and revel in the fact that Elliot’s lost his mind; but if that’s the point of this show, what is left to engage the audience intellectually? Is this a show exploring the societal impact of a digital revolution, or is it just a post-script toÂ Fight Club (right down to identical musical cues), with a pretension for Important Ideas?

While it’s obviousÂ Mr. RobotÂ is fully engaged with the stories and characters it inhabits its world with, its obsession with style and being mysterious are completely selling it short, in what’s beginning to feel like the latest example of a showÂ Heroes-ifying itself (that is, a modest show with a lot of potential, squandering its creative momentum when faced with the pressures of critical hype). With only five episodes left to go,Â Mr. Robot‘s dual task of rebuilding its own reality, and delivering a satisfying end to this season (that also sets it up for an inevitable third season) presents it with a tough road to redemption in 2016.Â No matter how many Angela/Dom face offs we get, there’s a certain feeling this season that Mr. RobotÂ has lost its step, no matter how many times Elliot convinces us what we’re seeing is real, and necessary to the revolutionÂ lost amidst the chaos of his mind (and no, I don’t give a sh*t where Tyrell Wellick is anymore).