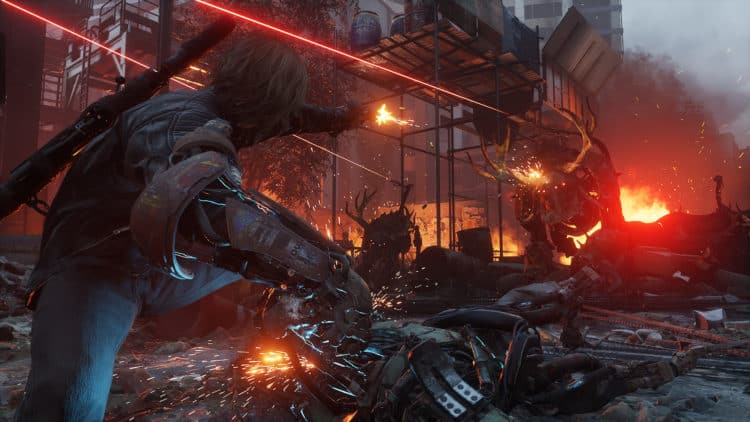 Back in 2019, a trailer dropped on the gaming community like a bomb in the guise of a new IP by developer Pearl Abyss titled Plan 8. The trailer showcased a war-torn world that’s riddled with rogue killer machines roaming the wilderness along with transhumanism being a part of everyday life. Ever since the trailer was shown, things have been pretty quiet with its development. Based on the footage, this game is going to have blistering-paced action and an assortment of mechanical threats to combat. With talent behind the Counterstrike and Black Desert online helping out with the development of this title, there’s definitely a lot of potential here. Currently, it’s widely known to be an MMO Exosuit shooter to where players will be able to build and customize their avatars in a variety of ways. Given that this could be an open-world experience, it appears that players will also be able to parkour around the environment, only to be enhanced with cybernetics.

Plan 8 definitely seems to be a third-person shooter with cover mechanics that’s akin to Gears of War. The story seems to be a bit of an enigma at this point however, it is easy to guess what generally is going on based on the trailer. It appears that mankind is on the brink of extinction due to the robotic threats looming around. Whether it is a manmade antagonist that’s somewhat like Skynet in The Terminator franchise or something extraterrestrial is unknown at this point. It’s clear that factions of humans are forced into hiding out into the wilderness to build some kind of resistance to defeat the mechanical monsters that are taking over the planet. It is very likely that this will be an open-world, mainly due to the fact that Pearl Abyss is well-versed in this genre. It’s shown that players will be able to traverse the landscape on; horseback, vehicles, and even exosuits. On top of that, it also appears that players will be able to take to the sea with boats, as well.

There is definitely a lot to speculate about based on the trailer. One would assume that Plan 8 will be a co-op experience at its core. Playing with other players and maybe A.I.-controlled bots will probably be the root of the gameplay. A squad of fighters and teamwork seems to be a major element with the combat and taking down these cybernetic foes solo might be a chore. The environment will be interactive to where players can rip off car doors to use as an improvised shield. Also, it looks like players will also be able to uproot light poles and use them as long-ranged melee weapons. If there’s anything to take away from the trailer, it is the fact that everything shown is in-game footage and there’s no doubt it looks well-crafted. Players will be able to full-customize their character to make it uniquely their own. The gameplay in Plan 8 revolves around humans wearing exosuits that have a variety of upgradable abilities. With these suits, players will gain an edge in combat by flying, having super-human strength, and scaling walls. Plus, all weapons in the game can be completely customized and modded to suit the player’s needs.

However, after the trailer for Plan 8 was released, it kind of disappeared and there haven’t really been any updates since. Some assume that the project is on hiatus or perhaps just canceled altogether. Well, it appears that since Pearl Abyss hasn’t given any updates on Plan 8 is probably because they have been busy getting re-established in the west. According to recent reports, Pearl Abyss has opened two new studios throughout Europe and North America for expansion with their development teams. The studio in North America will be in Los Angeles and the studio in Europe will be in Amsterdam. These studios will be overlooking the western releases with Pearl Abyss’s upcoming titles; Crimson Desert, DokeV, and Plan 8.

So, it appears that Plan 8 is indeed still in development, but things have been pretty busy behind-the-scenes with Pearl Abyss. Currently, these two studios are working hard to complete these projects before the release date. Although there haven’t really been any updates on this IP for the last couple of years, chances are that players will have a gander with a new gameplay trailer this August at Gamescom. Of course, nothing is confirmed at this point but it will be nice to see how things are progressing with this title. Even with the early footage that was shown, it appears that this title is on track to be something special. The ultimate goal with Plan 8 is to make a truly next-generation MMO experience that players haven’t seen before.

Hopefully, soon players will get a more detailed description of how exactly the game will be structured. Plus, finding out more about the story will also stoke some excitement within the gaming community, as well. It’s a good bet that Plan 8 will have an epic single-player campaign in which players can join in to help out. On the other hand, it is also possible that it could strictly be a survival sandbox title. As of right now, gamers will have to hold on a little while longer to find out what Plan 8 is all about. After the reveal trailer for both Crimson Desert and Plan 8 that happened back-to-back, Pearl Abyss is quickly becoming a development team to be excited about.

Light In The Tunnel

Pearl Abyss clearly has an eye for detail and their main objective with their game is implementing immersive gameplay that will truly reflect the next-generation hardware. Although there isn’t really a locked release date available for Plan 8, it is actually coming pretty soon. Both Crimson Desert and Plan 8 are currently in heavy development simultaneously and they will be released close to each other. It’s slated that Crimson Desert will be released in the fall of 2021 and Plan 8 will be released shortly after. Upon release, Plan 8 will be available for the PlayStation, Xbox, and PC.