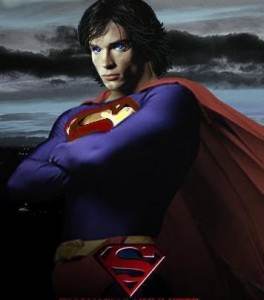 Comic Con jumped into full swing today and with it came news of Warner Bros. reps inviting unsuspecting fans into a special viewing of a new Superman costume, rumored to be making its debut on Smallville this coming season. The news broke today at Ain’t It Cool news who first posted the scoop sent in by an untested source, but then later parts of the sources comments were validated by someone familiar to the site.

“Warner bros reps are grabbing random people at the show and giving them a sneak peek at the new Superman costume for Smallville. Me and friends were grabbed by one girl and taken to a room (down the stairs next to the giant starbucks) and shown it,” said Anne, the untested source of the first report. Anne went on to say, “it’s gobsmackingly awesome! no spandex it looked like leather, its one suit, the top is blue at front and back, red on sides and arms, the trousers are blue at the front and back, red at sides. the superman symbol on the chest protruding out, its red. no cape. it was on a stand we could walk around. There were no photos allowed, but the lady said we could tell others at show, to build hype. They’re showing random people the suit throughout today, tomorrow and Saturday, and Sunday. Tom Welling is flying in just to wear it when its unveilled at for Smallville presentation on Sunday.”

It was almost exactly a month ago when Ain’t It Cool news broke the story about an unknown source who claimed to have seen materials being produced for Comic Con which made notice of a new movie-length project for Smallville being touted as Metropolis. Many assumed that this would either be a movie or a television-movie and not a new series. Today’s viewing of this new Superman costume seems to indicate that at least parts of the story are true, and it seems likely that we will be seeing Tom Welling put on this suit during season 9.

Later today, further information was posted by a more trusted source that said, “Confirming to you the Superman outfit for “Smallville” is real, there is a mad dash to a bunch of Warner reps happening right now. But your previous report is slightly off –the suit makes its on-screen debut in the Season Nine premiere, which is called ‘Superman’.”

Although this part of the story is from a more trusted source, and it does seem to validate that there is in fact a superman costume there, and it will therefore be used in season 9 (otherwise why have it there to begin with), I’m not yet certain how valid this information is. If you do a little research, you can quickly discover that the titles to the first three episodes of the season have already been released, and according to those details the first episode of the season is called Solitary, not Superman. This seems to indicate that either the source was mistaken, and the opening episode of the season is still called Solitary, or else the episode title Solitary was deliberately given to us in order to mislead and misguide us. What’s worse is that it seems like it will be at least Sunday before we learn for sure what the big Smallville secret is and how it will playout on the show in the coming season.

So what do you think it’s for? Sound off in the comments and let us know what you think about Clark becoming Superman now instead of at the end of the show, as it always seemed to be the plan.