Home
TV News
Is the Show Guy’s Grocery Games in a Real Store? 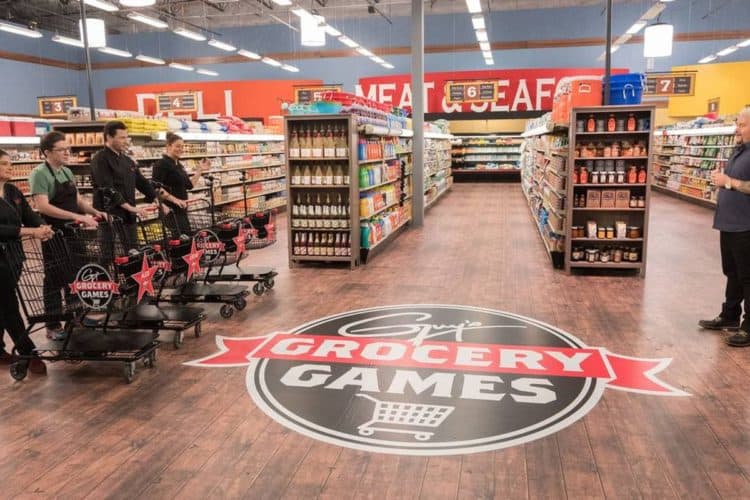 For decades, game shows have kept people entertained. There’s something about kicking back on the couch and watching complete strangers compete for a prize that is honestly hard to turn away from. Since 2003, Guy’s Grocery Games has been that show for a lot of people. Hosted by the legendary Guy Fieri, contestants on the show must shop for groceries and then prepare a meal based on Guy’s instructions. Different challenges are also incorporated into the show to put contestants’ skills to the test. The show is well-liked for its unique approach to creativity in the kitchen. While everything about the show seems real, many viewers wonder if Guy’s Grocery Games is actually filmed in a grocery store. The answer might surprise you. Continue reading to find out if Guy’s Grocery Games is filmed in a real grocery store.

Where Is The Show Filmed?

The answer to the question or whether or not the show takes place in a real store all depends on which season(s) you’re referring to. The first season of Guy’s Grocery Games was filmed in Field’s Market in West Hills, California. This location is an actual grocery store. However, since season two, the show has been filmed in Flavortown Market. While the location operates as a fully functional grocery store on the show, it’s not really a grocery store. The ‘market’ is a 15,000 square foot set that continues thousands of grocery items – each with a real price tag to add to the ‘real’ feel. Flavortown also has almost all of the elements of an actual grocery store with the exception of a baby care section.

The show’s set designer, Scott Storey, was also the set designer for the now canceled show, Supermarket Sweet, which followed a similar format. He only had four weeks to design the entire set. Although most people said it was impossible, Storey quickly proved them wrong.

In an interview in 2014, Fieri explained why they had chosen to film at a new location. He said, “The aisles are wider, the lighting is better, so it makes it easier for the chefs to shop and see what’s on the shelves. Going along with the shelves, the culinary team has stocked and set them up so they’re far more shopper-friendly. There are a lot of great markets around the country, but I wish Flavortown Market really existed.” The face that the new set is closer to Guy’s home was probably also a big part of the reason why he decided to have Flavortown built. Additionally, using a set allows the production team to have much more control over the process.

What Happens To The Show On The Food?

Since Flavortown isn’t really open for business, it’s fair to wonder what happens to the food that doesn’t end up getting used on the show. Thinking of all that food potentially being thrown out wouldn’t sit well with a lot of people. But the good news is that nothing in Flavortown goes to waste. According to Starcasm, “On Friday night, the bread, meat and seafood cases are checked for items that are close to expiring. Products that are still good are donated to local food banks. And even the food scraps left over from cooking don’t go to waste — they go to a local farm for animal feed.”

Brandi Milloy, who has been a judge on the show, also says, “Flavortown Market [the grocery store for the show] is massive, and their culinary team works hard to get fresh produce, unique products, and rare foods (like rabbit and uni) stocked and ready for the contestants. And when I say stocked — I mean there’s no such thing as a “fake aisle.” The shelves have products all the way back. However, since only some of the food gets used, I learned that the show makes a huge positive impact on Sonoma County’s community, by donating the extra food to local organizations.”

Some of the organizations that are frequent recipients of Flavortown’s food include Worth our Weight Culinary Apprentice Program and The Redwood Empire Food Bank.

Even though the show is no longer filmed in a grocery store, it hasn’t lost its essence. Guy’s Grocery Games is still fun, exciting, and competitive. Those qualities, mixed with the fact that the show’s food donations have helped sustain the local community, are what makes Guy’s Grocery Games as successful as it’s become. Not only is this a show you can enjoy, but you don’t even have to feel bad about it.