Home
TV News
Is The Show “Whose Line is it Anyway” Actually Fake? 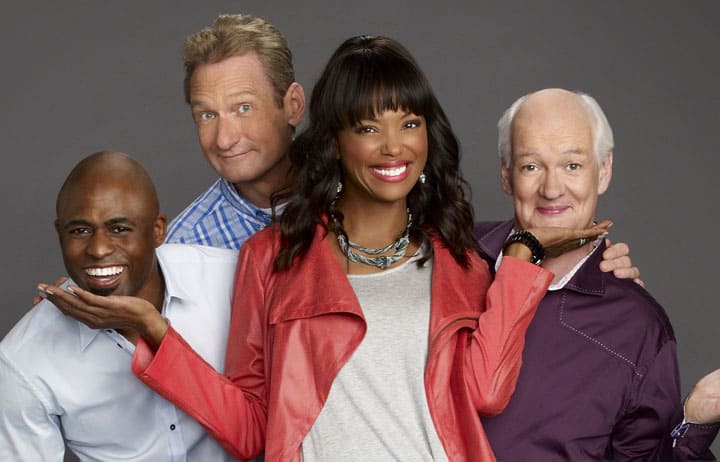 Drew Carey is the master of improvisation, and he’s and Aisha Tyler presents the funny television series “Whose Line is it Anyway?” If you haven’t yet seen the show, it’s based upon a suggestion made by the studio audience for skits or games that a panel of four actors use to act it out. Those who are familiar with the show know that regulars like Colin Mochrie, Ryan Stiles, and Wayne Brady are regulars. It’s shown on the CW and American Broadcasting company. It began in 1998 and has been entertaining us ever since. Some viewers love it, but some think that it’s totally scripted and rehearsed. Is the television show “Whose Line is it Anyway” really just a fake? Here is what we learned.

Do the suggestions really come randomly from the studio audience?

The biggest question about the show is whether or not the suggestions for the improvisation skits are predetermined and rehearsed, or if they are actually random suggestions that come from the audience in the studio. There is some speculation by viewers that careful preparation has been made to come up with such outlandish skits on the spot by the actors. Part of the reason for the skepticism is that the four actors, plus Drew Carey who occasionally gets involved do such an amazing job of delivering their rendition of the suggestions that most believe it couldn’t possibly be completely improvised. According to the CW, the suggestions are completely made up on the spot and the actors have no clue about what they’re going to need to pantomime through improvisation. Colin Mochrie has delivered hard-core proof of his improvisation talents through his long history of doing so. Yes, he’s really that good, and we know from viewing experience that Drew Carey is as well. They’re quick thinkers and in a split second of thinking, they have the capacity for jumping right into character and making us laugh with their zany antics. Although there have been a lot of edits made to the recordings, none of the suggestions are fake and the actors have no idea about what’s coming up next.

How do we know that the skits are not pre-rehearsed?

According to the CW, the editing crew doesn’t do any more editing than is absolutely necessary, because the content is so funny that it’s been good for their ratings to keep the majority of the content in the video. The comedians tend to bend or break the rules and you never know from one minute to the next what they’re going to come up with, and the majority of it is howlingly funny. Having said this, there have been captured video of moments where the producers had to intervene because the content has exceeded what was considered to be appropriate for television, so some of the material couldn’t be used. We have it from the source that the suggestions are totally authentic and the improvisations are truly delivered on the spot.

Where did the question come from, to begin with?

Fans and others who viewed the show get online to discuss their opinions on forum boards, and as it turns out, there are quite a few viewers who believed the show to be both scripted and rehearsed. It was interesting to see that for every negative comment, asserting that the show is a fake, there were also fans who stepped forward to share that they didn’t believe that this is the case. The skepticism about the authenticity of “Whose Line is it Anyway?” originated with the viewers.

Viewers really do care about authenticity

The television comedy game show that first aired twenty years ago is still as popular and funny today as it was upon its first release. We learned that the fan responses with regard to its authenticity were all over the map. Some shared that they would feel disappointed if they learned that the improvisations were rehearsed. Others said that they would be totally devastated to discover that the actors had pretended to be improvising. While some find it difficult to believe that anyone could act that well on the spot, we must remember that these are some of the best actors on the planet when it comes to improvisation and they’re famous for a reason. Even some professionals who teach improvisation believe that the show was scripted, but here is one consideration to ponder. Not all of the improvisations were that funny and some of them were bombs. If the show were truly scripted then we believe that all of the skits would have been humorous and there would have been far fewer failures.

After weighing the evidence and learning what the CW had to say about the authenticity of “Whose Line is it Anyway?” we have come to the conclusion that the show was definitely authentic. Drew Carey is well-known for his ability to improvise on the spot, and for the purposes of the American based show, several of the actors were imported from the British version. They were all known for their improvisational skills and this each is a talented comedian. It’s not that difficult to imagine that the actors really are that good and that they’re able to improvise a suggested theme on the spot. If the show were scripted and rehearsed, then why would the producers have to intervene and edit out some of the more inappropriate footage? We find it hard to believe that the show executives would be willing to waste everybody’s time and resources in this manner. It’s far more likely that the show is truly authentic and that sometimes, in their zany interpretations, the actors got a little too carried away and crossed the line. Our conclusion is that “Whose Line is it Anyway?” was an authentic production that became a big hit.