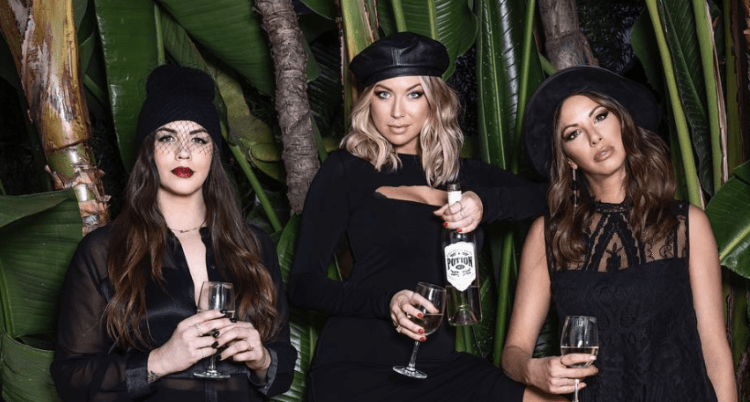 Ever wonder how famous people spend their money? Well it would seem that some like to buy expensive jets, houses, and various other things, but when it comes to making something work even while it’s costing an arm and a leg to run, a wine label seems like it might be something that would be wise to invest in. The ladies of Vanderpump Rules have discovered this lucrative practices and are now placing their names on a label, Nocking Point in fact, to create their own wine. While they constantly refer to themselves as ‘the witches of weho’ or West Hollywood, it would seem that their wine is that perfect magical potion that they’ve decided to push towards the general public. You can imagine the surge in the demand once people learned of this, as the very idea that something bearing any relation to Vanderpump Rules is bound to set many people to rush towards whatever store or site is featuring this product.

The ladies have given out the information on where and how to buy a bottle or two of this supposed potion and have even come up with a way for some women to fully enjoy it by adding in “Ingredients in our precious wine? The tears of your exes. So you’re welcome for that.” If that leaves you laughing and ready to go out and buy a bottle then more power to you, but if it leaves you a bit salty it’s not too surprising. One has to remember though that coming from reality TV stars it’s not exactly a statement that’s meant to do anything other than evoke a response. The marketing strength of these words is great since it definitely speaks to those that both watch the show, might have the same experience, or just like to be sassy when they want to be. Otherwise it’s the kind of slogan that might make a lot of people roll their eyes and move on. That might sound a bit cynical but the truth of it is that the reality TV is allowed to survive by being as outlandish as possible, and while making their own wine seems like a very good idea, which it is from a financial standpoint as well as a way to increase their reputation, and to create a response in the audience no matter how positive or negative it might be.

That being said, this wine might be very good. It might be some of the best wine that’s ever been made, though a lot of vintners might have something to say about that. But the one thing that is going to sell it, and this is a proven truth of any wine that’s ever been sold by celebrities, is that it’s being promoted by a group of individuals that are seen as famous and edgy in a way that people enjoy. If it does well then that’s great, but all in all it’s not quite as impressive as it seems unless you’re a fan. Reality TV has taken a lot of stories and made them into something that seems so outlandish and so fabulous that people can’t help but look at these shows and think that things are so much more glamorous than they actually are. The idea that they can sell a wine based on this ‘reality’ is kind of funny but also very realistic in itself since it’s been proven time and time again that celebrities can peddle just about anything. How big of a celebrity each women is touted as is the only thing that might cause the sales to dip, and whatever the price per bottle is might do the same.

Let’s be honest, the price per bottle might be a bit high for some people, especially since the taste of wine lovers tends to fluctuate now and then. But then again a lot of people tend to pay a lot of money for something that’s endorsed or has anything to do with a celebrity. The ladies of Vanderpump Rules aren’t exactly being foolish for attaching their names to this label but you have to wonder if the show is providing what they need or if this endeavor is just to expand their influence a bit. It could be both or it could be just the latter since quite honestly enough people know about the show to make it rather valuable and the ladies rather well off.

So for all those that are ready to purchase a bottle and support the ladies of Vanderpump Rules and purchase a bottle or two go online and see how easy it is. As for tasting like the tears of your exes, well, that’s for every person to decide since for some it’s something sweet that might tingle on the tongue.