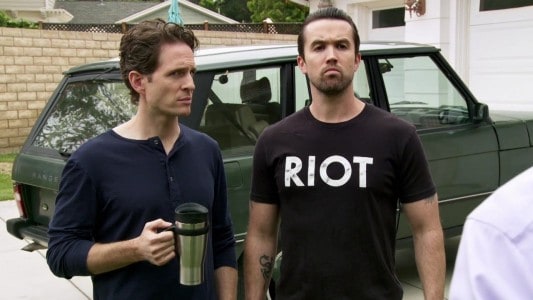 Anyone who has ever transitioned from city life to suburban life knows that said transition is not an easy one. The two ways of life are so different from each other, from pace of life to the noises surrounding you. Even for normal well-adjusted people, this can be a difficult change so when you have two people as dysfunctional as Mac and Dennis making the move, there’s only way way it can end: in complete and utter insanity.

Having grown sick of living with Dee and finding they couldn’t afford to pay rent anywhere else in the city, the two friends decided to pack up their things and move to the suburbs. Immediately, they grew suspicious of everything surrounding them, from the overly friendly neighbors who only wanted to discuss the weather to the weird noises coming from all over the house. The show did a perfect job of representing all the annoyances that come with living in the suburbs, adding their own flare of over-the-top comedy to depict suburban life. No one really wants to talk to their neighbor every day about how hot it is outside and Dennis’ dialogue as he drove through traffic to get to work every day perfectly matches up with the inner dialogues that so many of us have had in the exact same situation.

In their new suburban life, Mac took on the role of the house wife, staying home to cook and take care of the housework while Dennis went off to work. Like in so many past episodes, Mac couldn’t stand up to Dennis and was forced to remain home and deal with the things that Dennis didn’t want to deal with. This naturally escalated to the stereotypical arguments that so many husbands and wives have. Mac felt like everything he did was just for Dennis while Dennis had to point out that he was the one going to work and making money every day so that they could continue living there. Rob McElhenney and Glenn Howerton were truly amazing as they portrayed the dysfunction that so many suburban families try to hide behind the picturesque and on-the-surface perfect lives that they lead.

Despite hating everything about suburban life, Mac and Dennis tried to wait out the month they needed to live there to win the bet they made with Frank.Â Things quickly descended into horror movie levels of psychotic behavior as the weeks went by and Dennis and Mac went crazier and crazier. By pretty much any standard, it could be argued that Dennis is the least mentally stable person on the show, constantly flying off the handle. This episode was no different, as his hallucinations and actual behavior become more and more concerning. In one of Howerton’s best performances of the series, we saw Dennis completely lose it, proving that the character could very likely beÂ insane. Between the music in these scenes and the acting, it truly did feel like something out of a suspense/horror film, making the whole situation that much funnier.

With the focus on Mac and Dennis struggling to surviveÂ in the suburbs, we didn’t see as much of the gang as we’re used to. But that was alright, as McElhenney and Howerton were able to carry the episode with their performances. And perhaps it’s for the best that the mystery behind Frank and Charlie’s Russian hat bit will forever remain a mystery. The other characters supported the story-line well and added some great moments to the episode, but overall they weren’t needed for anything besides that in this episode. If someone were to tell me that I would enjoy an episode that barely had Charlie Day in it this much, I would have thought they were crazy. But they managed to pull it off in this episode, with a fantastic depiction of how crazy suburban life can drive you. My only disappointment with this episode was that the dog had to die.

Mac and Dennis adjust to suburban life in an episode of It’s Always Sunny in Philadelphia that perfectly depicts the annoyances that come with living there.