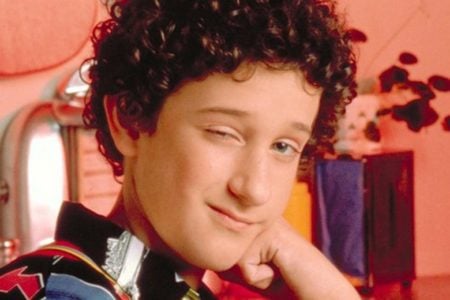 Anyone saying that you can’t have a Saved by the Bell reboot without Screech is a little bit delusional since voila, we have a Saved by the Bell reboot. But here’s where that becomes problematic, if there is no season two then one can almost guess that someone will state that it’s because Screech wasn’t there, and if there is, then it may very well feature Dustin Diamond’s character that a lot of people will enjoy and some people will possibly groan about since Screech was a sidekick at best and an annoyance most of the other times that was wildly out of place with the group that he hung with. If anyone is going to be honest about this, Screech was the kid that the rest of the group hung out with to make themselves feel a little better when they needed a pick me up. He was useful in his own way and he did manage to gain a lot of sympathy from the audience and his fellow characters, but the guy was a clinger, a hanger-on that wasn’t as needed as people think he was. If this season goes on to prove that it will hopefully prove that if there is a season two that he’s going to be a glorified extra and won’t be of much use at all. There are plenty of Dustin Diamond fans, for some reason, that would go on to say that with him there isn’t a show, but as far oddities go, Screech was definitely valued for his strange ways. He was the funny-looking kid that was put in for comic relief and ended up being adored by those that related to his character.

If he does show up for the second season of the reboot it’s likely that he’ll show up as an adult that’s struggling to understand his own kids and realizing that life only got harder after high school and college. In a lot of ways, it does feel that Screech would be going by his real name finally and would hopefully try to shed the geek routine that carried him through his early days until the show was over. As it’s been seen in real life Dustin Diamond has been outed as kind of a jerk that doesn’t care what he says and makes a great number of excuses for the way that he’s lived his life. Whether one wants to believe Diamond’s take on his exploits and his life and think that he’s a saint that’s been misunderstood for so long, or if they want to look at his prison record and listen to those that are more than willing to drag his name through the muck and other foul substances it’s hard to deny that he might actually come back to Saved by the Bell if the show holds up and a season two is eventually ordered. If that happens, and for some, it’s a big if while for others it’s a foregone conclusion, it’s bound to happen that we’ll be talking about Diamond again to see just how fans receive him in his old role since as anyone and everyone should know when it comes to the entertainment industry, there’s nothing that people like better than a bit of gossip.

Dustin Diamond is a classic case of a kid that went through life being the geeky sidekick in a favored show and tried to harden up behind the scenes as he got older, only to wind up making poor decisions and then trying to play them off as if they were meaningless and wouldn’t stick to him for years to come. Some would say to forgive and forget since it’s in the past, and that’s not a hard thing to do, but the moment Diamond opens his mouth it’s a little too easy to remember that he can be the type of guy that will deny any responsibility for things he’s done or said in the past and will do it again if he’s given the chance. That might sound judgmental, but his track record kind of speaks for itself since he was the only one opening his mouth when it came to building and eventually ruining his own reputation. No one went after Diamond, and his fellow Saved by the Bell costars had no idea about his supposedly ghostwritten book that went on to say such horrible things about them. That excuse is usually enough to elicit a laugh since apparently since it’s not hard to think that anyone would distance themselves from a book that made them look like a lonely and downcast individual who was actually more of a victim than anything and made his costars look horrible, but Diamond has stated that it was written by a ghostwriter and was completely out of context. It’s hard to say about any show, but hopefully, season two doesn’t happen, and if it does, let’s hope people come back to their senses before dialing Dustin’s number.