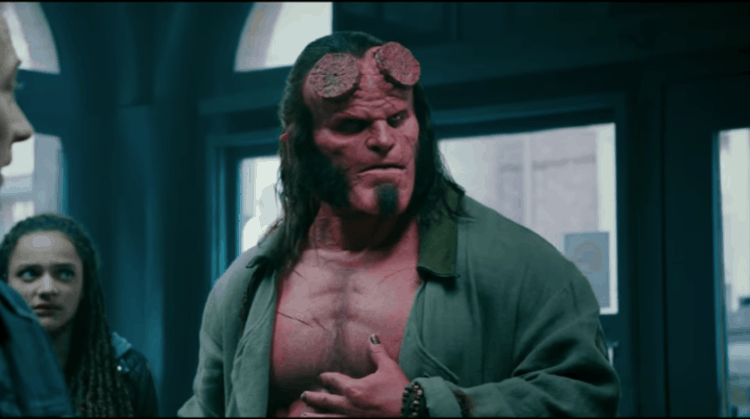 It’s just time to stop when it comes to Hellboy. Adam Holmes from Cinema Blend and many others agree since the reboot that recently came out was supposed to revive and refresh the iconic superhero but in truth all it did was sink into the mire a little more. The 11 years between the reboot and the Ron Perlman version probably didn’t help matters any, but while bringing David Harbour into this and making his look just a little grittier than Perlman’s was supposed to make it edgier and even more raw, it seriously underwhelmed at the box office. For a lot of Hellboy fans this is kind of disappointing since when the comic came out it was chock-full of rich story ideas and characters that were considered to be nothing less than awesome. But even Guillermo Del Toro’s version wasn’t quite as kind to the comics as people would have liked, and yet it was the better version of the two.

Hellboy is without a doubt one of the strangest but most gripping comics created in the past few decades, but at the same time it’s still something that, when captured in a great way, is able to make viewers laugh, gasp, and recoil in horror since the version with Perlman really let loose and yet kind of got silly with it. David Betancourt from The Washington Post agrees that the visuals in the new Hellboy were spot on and well done, but the overall story was apparently quite boring and tedious to many viewers. The same could be said in some regards for the original but the reboot was supposed to fix all that and create a more dynamic and fluid movie that gripped people in a different way and left them gasping for more once each scene was over and done with. This felt more like a moment to hold your breath and wait to expel it in amazement at what came on screen next. Instead all the average viewer did was sign in mild disappointment. Some folks no doubt liked it and would gladly defend the movie and that’s their call and right. But in all honesty the Hellboy movies need to stop for now and give the character a rest, if only to make certain that his name doesn’t get dragged through the mud again.

Michael Nordine of IndieWire makes a great and very astute point when he wrote that a lot of Hellboy’s signature personality is missing in the reboot, and while there might be a reason for this that could also be part of what killed it for a lot of fans. If you’ll remember, Del Toro’s Hellboy had a huge affinity for cats, candy, and was more laid back and not quite as uptight. Plus, where there was plenty of fighting in the first two Hellboy movies there was definitely less gore. While this was kind of lamentable in some cases it was actually able to push the story forward a little more in others. Plus, where the reboot went all out trying to get everything to look right, Del Toro’s version was trying to put in as much as possible and still keep the hero kind of loose and somewhat easy to like. It wouldn’t matter if you changed Harbour’s version to where his attitude was more likable, he still looks like he’d want to each your soul through your navel if you said the wrong word to him.

With all this in mind it has to be said that Hellboy is a great idea as a comic, and it wasn’t an absolutely horrible idea for a movie. In fact if Del Toro had been allowed to make a third installment it might have been able to cap the whole thing off and salute the fans with a nice jaunty bit that allowed them to feel as though their loyalty had been repaid. But the reboot was quite simply a flop that was touted as a new and decidedly awesome-looking beginning that sputtered and came to a stop the moment it hit the theaters. In fact it’s hard to not equate this movie with Spawn since both comics were well-written, had great artists working on each issue, and were easily among some of the best of their time. But somehow the translation between comic books and movies seems to get muddled over and over as directors take their own meaning from the source material or, even worse, never look at the source material for anything other than the physical appearance of the characters. In this manner a lot gets lost and we’re subjected to the director’s vision, which could be something entirely opposite from what we’re expecting and what was penned into the comics years before. It’s time to put Hellboy aside for now, and wait until someone that can follow the comics comes along.