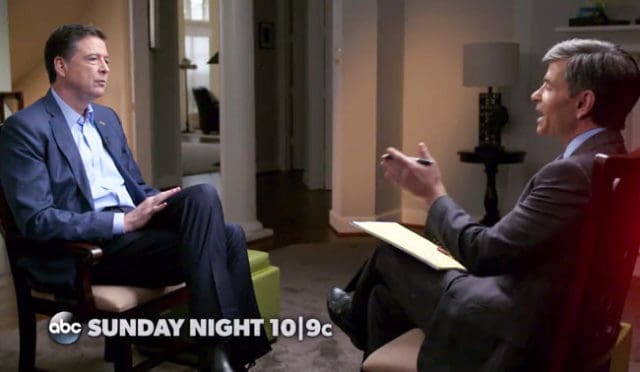 There are times when words might come back to bite a person in the worst way, but given that James Comey was dismissed by Trump, the same man that he’s comparing to a mob boss, it seems as though there’s not a lot more that can be done to him. In his upcoming 20/20 interview withÂ George Stephanopoulos it’s already been hinted that what he’s going to say is going to shock the Trump team to no end. Given the fact that he was the director of the FBI until his dismissal he was likely privileged enough to access some very interesting information. But just what is he going to be allowed to divulge?

If it’s said to be able to shock Trump then it has to be something unique and more than a little embarrassing to the current POTUS. Some people might believe that this could lead to another nail being put into the president’s career but in truth it seems like it might be another story that, while interesting and not all that flattering, could be seen as just another irritant by those that dislike Trump. There’s no doubt that the man has ruffled feathers and trampled on those he saw fit to in order to reach the White House, but being the POTUS isn’t a popularity contest, it’s about who can do the best job. Right now Trump is being praised for a great many things that it seems might have been difficult to accomplish seeing as how he’s taken so many vacations since he entered the oval office. Chances are that his cabinet has been doing whatever they can to modify the results and make sure that their boss is able to look as good as he possibly can so that their job won’t be next on the chopping block.

If not for the trend of letting people go that seem to be vexing him in some way Trump might have a little more credibility. Of course his most loyal people, those what will bow and scrape whenever he enters the room, will no doubt continue to make excuses and reason away just why he’s so great and why certain people had to be let go. But it seems fair to state that if they were the next ones to be put out into the cold they might change their tune just a bit. James Comey might not be the vengeful sort, and that’s a good thing, but it sounds like he’s going to let loose with whatever he might have wanted to say while he was still the director. That could bode very badly for Trump it seems if Comey decides to go down that road, but until the show airs people aren’t really going to know what’s coming.

We all say things that we can’t always take back at least once or twice in our lives, but Trump has been furiously tweeting these kind of things ever since he took office. Comey might figure it’s his turn to even the score a little bit.