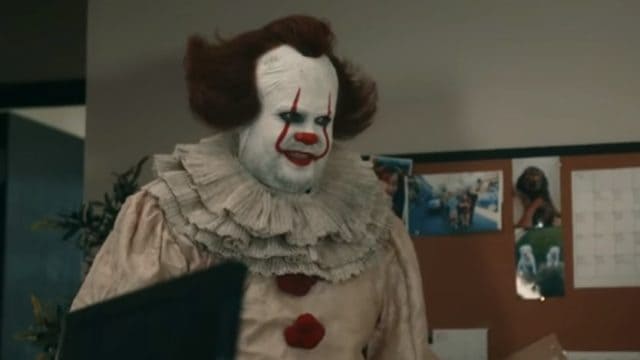 James Corden as Pennywise might actually be close to being as scary as Bill Skarsgard or Tim Curry. If he had fuzzy ears on top of his head he’d look like a demented teddy bear. But with that big shock of red hair and the white makeup he looks like the kind of guy that could give another monster nightmares. Plus, the use of the I.T. call summoning IT is pretty funny. Imagine being the person that’s having trouble with your computer and suddenly looking up to see a guy in a clown suit leering at you as though he’s wondering what your kidneys taste like with a nice Chianti.

IT has become such a media darling that almost everyone is trying to cash in on the fame that the newest version has enjoyed, creating spoofs and caricatures of the movie in ways that are far beyond the norms of the original piece but are still close enough in fact to be called clever homages to the movie. Each spoof and brief skit that’s been created has been absolutely hilarious as they go on to create a vision of Pennywise that is both funny and ruthless in his own way.

Did you ever happen to notice that back in 1990 when the miniseries came out that few if any people really latched onto the idea of IT? There were no Pennywise commercials, no costumes, no media hype like there is now. There was just the miniseries, which really didn’t impress anyone enough to get it any real notice. Stephen King fans took note though. Those that had read the book were quick to point out errors, omissions, and additions that didn’t make sense. Even in this current version, which was much closer to the book, fans have noticed a great deal of differences that were fairly obvious.

It’s very hard to get anything past a fan that’s read the book in advance. That’s why despite the popularity Pennywise has been watched so very carefully and every spoof needs to be at least somewhat on point so that fans don’t get too riled. Any representation of the homicidal clown needs to be at least close to the actual character to be taken seriously, or in this case to evoke even a small peal of laughter.

You’ve got to admit, IT showing up for an I.T. call and knowing what I.T. stands for better than the person working there is pretty funny. And his practical explanations for popping up in the guy’s file cabinet and then standing up in a slow and creepy fashion with a red balloon in hand was just classic. But if you want one good piece of advice from this clip, don’t ever pop the red balloon from the monster clown. It’s not going to end nicely.

The follow up with Freddy Krueger as the I.T. guy is a nice touch since the guy is already irritated and scared out of his wits. Let’s just throw in another psycho supernatural killer and see what happens. Works for me.