Home
Jane By Design
Jane by Design Speculation: What Would Have Happened Next Season? 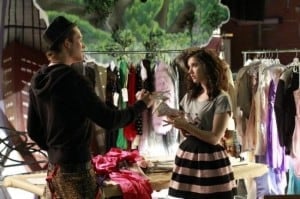 Jane by Design became the lone ABC Family cancellation of theÂ summer on Friday, as the teen fashion dramedy had its run end after aÂ short 18 episode firstÂ season. The news was more than a little disappointing, considering the open-ended nature of the finale and theÂ seriesÂ showingÂ signs of putting it all together, but the end of the road doesn’t mean that theÂ speculation has toÂ stop. Below I’ll be running throughÂ some of the main plots from Jane by DesignÂ with where they left off and how I imagine them going in the never-wasÂ secondÂ season.

Jane and Billy
Where things left off: The best friends had grown apart during theÂ summerÂ season, thanks to new relationships, feelings that never lined up at theÂ same time,Â and busy lives. Just as Jane was about toÂ spill her guts to Billy about how he’s the guy thatÂ she wanted to be with, not Eli, he “chose” toÂ stay with his girlfriendÂ Zoe and left the play with her in tow.
Where they would go: EverÂ since the pilot episode, you knew that Jane and Billy would get together eventually. They had too much chemistry and too much history for it to not happen, though it became a question of timing and willingness to change a dynamic that had worked forÂ so long. I fully believe that somewhere/sometimeÂ in the Jane by Design universe, Jane and Billy will get together eventually and it will be a wonderful relationship that will be like their friendship onÂ steroids. It may take until they’re both a little more mature and emotionally ready, as well asÂ several moreÂ significant others and falseÂ starts, but they’ll find a way to give it aÂ shot. It’s too bad we never got toÂ see that dynamic play out onÂ screen.

Jane and her fashion career
Where things left off:Â Jane received a $5000 bonus from Donovan Decker for getting Jeremy to turn over the designs for the Harrods campaign, but Eli and Gray attended theÂ school play and noticed that Jane had been in charge of the costumes. The three ran into one another backstage in the finalÂ shot of theÂ series.
Where they would go:Â During the run of Jane by Design, Jane managed to get quite comfortable in her role as Gray’s go-to girl and upstaged her more experienced colleagues on more than one occasions. But it was in the design field that I think Jane would excel in the future (and hypothetical future seasons of Jane by Design). We didn’t get much chance to marvel at herÂ skills, but the pieces thatÂ she did do were reallyÂ strong and with her connections and drive, it’s only a matter of time beforeÂ she became an asset to a fashion house forÂ something other than her gofer ability.

Jane, Ben, and Kate
Where things left off: ThingsÂ started off pretty rocky for the three,Â since it had been Ben and Jane forÂ so long that they didn’t know how to live with an authority figure. However, they eventuallyÂ smoothed over a lot of their emotional issues, with Kate leaving the household to “grow up” and give her relationship with fiancee Dakota a chance.
Where they would go: I don’t believe that their relationship would have been 100% healed, though I do think that the next visit from Kate would have been much less tense than her visit in theÂ summerÂ season. However, a lot of the closure that came for the trio was predicated more on Kate having to leave in a hurry than hashing out anything that came from her abandonment of them,Â so I couldÂ see their issues popping up again in alt-Jane by Design.Â Ben, in particular, didn’t get a lot of peace from Kate’s return, having taken a while to justÂ be able to be in theÂ same room as his mother; but could hisÂ sojourn into the minor leagues, fulfilling a life dream, have made him understand Kate’s need to roam?

Ben and Rita
Where things left off:Â The former high school classmatesÂ hadÂ started up a relationship during theÂ season, but old insecurities and aÂ severe case of miscommunication almost derailedÂ something promising. After Ben came back from hisÂ stint in the minor league and poured his heart out to Rita, the guidance counselor decided to eschew taking itÂ slow and planted a very public kiss on her boyfriend at the baseball field.
Where they would go: I always thought that Ben and Rita went well together. His goofinessÂ makes herÂ step out of herÂ shell, her earnestness calms him down and makes him think about growing up a little bit. TheyÂ seemed to haveÂ settled all of their major problems in the finale, with Ben choosing Rita over drama teacher (and former prom queen) Amanda Clark and Rita letting go of any fear thatÂ she had about how quickly their relationship was moving; therefore, I don’t think there would be too much that could rock the boat here. Their difference in personality makes difficulties inherent in their relationship, but they kind of recommitted themselves to the idea of being together in the finale and I think that they learned about the value of talking to one another.

Jeremy, India, and the new career move
Where things left off: Jeremy had decided to leave Donovan Decker andÂ start up a label of his own, having reunited with India, who came to London to be with him. The two wouldn’t be mixing business with pleasure this time, however, with JeremyÂ strongly hinting that he would go after Jane to join hisÂ staff.
Where they would go:Â I don’t know if Jeremy could get off the ground with GrayÂ still in the fashion industry (and gunning for him after him being the mole), particularly if India managed to creep into his career after the two had decided to keep thingsÂ separate. (Jane being hired would make this a fairly distinct possibility.)Â India has great instincts and is aÂ shark, butÂ she’d overwhelm Jeremy and likely take over the venture herself, driving her boyfriend out in the process. Without India interfering, Jeremy would (likely) do aÂ small independent label that didn’t pose a threat to Donovan Decker, provide himself with enough to live on, and retain his love for fashion in the process.

You can post your hopes and predictions for the characters of Jane by Design either in the comments below or on the TVOvermind Jane by Design discussion forum here.