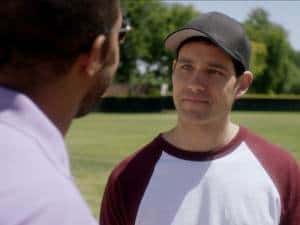 Jane may be able to accomplish more in one day than most people, but she can’t do it all nor can she have it all. Through the first season of Jane by Design, it seems that either her school/personal life flourishes and her work at Donovan Decker falters or vice versa, but the fashionista can’t make every nuance of her life flourish at the same time. At some point, she’s going to be faced with a choice and the time for choice is fast approaching on Jane by Design. But what kind of choice will she make? Can Jane keep her lives as a student and a worker in the fashion business separate and afloat through some pretty suffocating circumstances?

Listed below are the dates, initial airings, episode names, and episode descriptions for the final two episodes of this season of Jane by Design.

Tuesday, July 24
9:00 PM-10:00 PM EST
“The Sleepover”
The Harrods and Donovan Decker deal looks bleak when the Harrods team demands to get Jeremy’s designs. With little to go on, Gray gives Jane the task of going to London to find Jeremy and persuade him to come back. Now all alone in London, Jane heads out to find Jeremy and save the day. Meanwhile Billy tries to repair things with Zoe, only to have his relationship with Jane get in the way – again.

Tuesday, July 31
9:00 PM-10:00 PM EST
“The Bonus Check”
With the school play’s future in the lurch because of her, Jane decides to do something very unselfish – giving the play her well earned bonus check from Donovan Decker so the show can go on. But with the play back on, and getting some much needed help from the Donovan and Decker crew on the costumes, Jane feels like she may have given up more than just some money for this play.

Jane by Design airs Tuesday at 9:00 on ABC Family. You can check out my review of the most recent episode here.

Do you think that Jane will (inadvertently) come in between Billy and Zoe? Can she convince Jeremy to come back to America and, maybe, Donovan Decker?